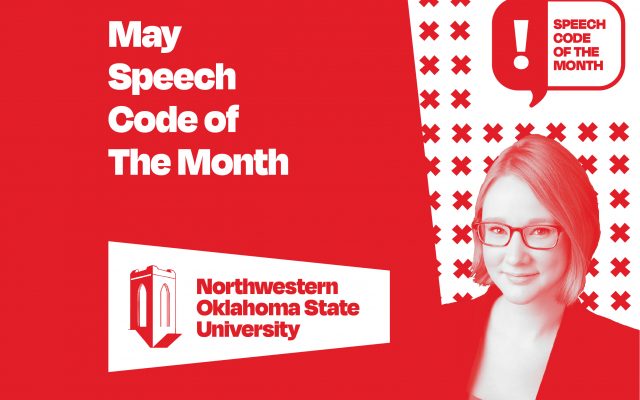 Students at Northwestern Oklahoma State University can hand out flyers, write chalk messages on sidewalks, and picket — but only if they have nothing of substance to say. After all, promoting a “cause” on campus without permission from higher-ups is forbidden.

Every month, FIRE highlights a university policy that hinders students’ free expression, and we’ve made Northwestern Oklahoma State’s “Campus Solicitations” policy FIRE’s Speech Code of the Month for May.

The university has two policies regulating the distribution of literature in its student handbook. One says you can do so spontaneously, but the other says disseminating literature for the purpose of promoting “causes” has to be cleared with the dean of students. Requiring advance permission doesn’t just contradict the first policy, it violates state law and the First Amendment.

The term “solicitation” causes problems in a lot of colleges’ speech codes. It’s often meant to refer to the distribution of commercial literature, and some schools do define it narrowly as such, as commercial speech can be subject to greater restrictions on campuses. But other schools lump non-commercial distribution of literature, like passing out political flyers, into definitions of solicitation that burden protected expressive activities.

Northwestern Oklahoma State is one such school, defining campus solicitation as “any dissemination or posting of literature, writing, drawing or marking on an interior or exterior wall or streets with any medium, picketing, or drawing of assemblages or meeting for the purpose of promoting either sales or causes” — a broad definition that certainly includes non-commercial expression.

The time is now for Oklahoma universities to resolve problems and inconsistencies like this in their policies.

Legislation passed in Oklahoma in 2019 mandates that Oklahoma’s public colleges’ time, place, and manner restrictions on expressive activities must be narrowly tailored to satisfy a significant interest, use content- and viewpoint-neutral criteria, and allow members of the campus community to “spontaneously and contemporaneously assemble and distribute literature.” But the “Campus Solicitations” policy says solicitation can’t take place “without clearance and permission” from the administration.

Elsewhere in its handbook, Northwestern Oklahoma State seems to have incorporated the requirements from that 2019 law. Its “Campus Expression Policy” says “Expressive Activity” protected under Oklahoma statute includes “distribution of literature,” and provides: “For outdoor campus facilities and areas, the Campus Community and the public may freely engage in spontaneous expressive activities.”

Unfortunately, Northwestern Oklahoma State didn’t update all of its policies to ensure consistent compliance with the law back in 2019. Thankfully, all schools in the state of Oklahoma just got another big reason to reexamine their campus speech policies: Last month, Governor Stitt signed into law House Bill 3543, establishing the Oklahoma Free Speech Committee to the Oklahoma State Regents for Higher Education.

The time is now for Oklahoma universities to resolve problems and inconsistencies like this in their policies, and FIRE is here to help. Our Spotlight database flags restrictive policies at six of Oklahoma’s public institutions, and FIRE’s Policy Reform team is always available to offer revision suggestions to schools in Oklahoma and nationwide. Better to do that now, rather than when the committee looks to investigate complaints against the institution!

Northwestern Oklahoma State must take this opportunity to revise its “Campus Solicitations” policy and comply with the state’s free expression laws.