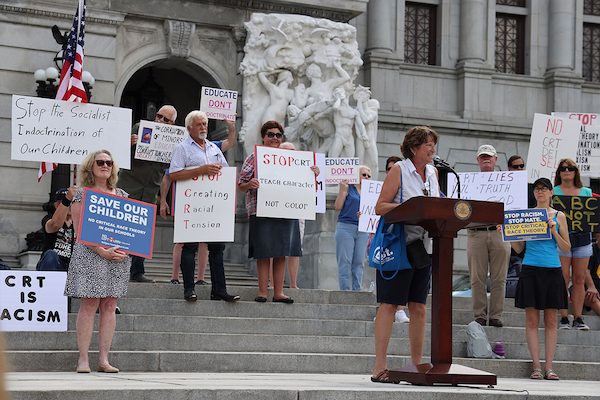 Last month, FIRE wrote about the wave of bills that, if passed, will regulate how race and sex are addressed in K-12 education and on college campuses.

Unfortunately, several of these bills, which are often described as opposing critical race theory, or CRT, are quickly advancing through legislatures despite containing unconstitutional provisions. Specifically, they often infringe on academic freedom in college classrooms. (FIRE’s mission is centered on protecting civil liberties in higher education and I do not write on the constitutionality of provisions related to K-12 instruction in those bills.)

Bills in legislatures across the country, including these states, contain unconstitutional bans on what can be taught in college classrooms.

This blog highlights a problematic Florida bill, which would encroach on First Amendment freedoms in college classrooms, and contrasts it with a narrower Mississippi bill which contains fewer constitutional pitfalls.

In many of these race and sex stereotyping bills, legislatures seek to limit not only the promotion of specific enumerated “divisive concepts” in trainings and orientations, but also the inclusion of such concepts in curricula altogether. In Florida, House Bill 7, which has quickly progressed through several committees in the state’s House of Representatives, includes language that prohibits what can be taught in college classrooms. It specifically states:

The “concepts” that would constitute discrimination include:

Higher education curricular bans, like that in HB 7, are unconstitutional. It has been decades since there was any question on the constitutionality of government bans on what can be taught in college classrooms. My colleague, Tyler Coward, made this clear in his testimony before the Florida legislature last week when he quoted the landmark 1957 case, Sweezy v. New Hampshire:

The essentiality of freedom in the community of American universities is almost self-evident. No one should underestimate the vital role in a democracy that is played by those who guide and train our youth.

Tyler continued, “Our Nation is deeply committed to safeguarding academic freedom . . . which is of transcendent value to all of us and not just the teachers involved,” quoting Keyishian v. Board of Regents, a Supreme Court case that came 10 years after Sweezy.

Of course, academic freedom is not conditional on faculty teaching in an “objective manner.” Faculty in business schools are, for example, perfectly within their rights to teach positively about capitalism and disfavorably about Marxism, or vice-versa. Requiring faculty to provide “training or instruction . . . in an objective manner without endorsement of the concepts” is neither practical, nor beneficial. As we have previously written:

A university exists to educate students and advance the frontiers of human knowledge, and does so by acting as a “marketplace of ideas” where ideas compete. The intellectual vitality of a university depends on this competition—something that cannot happen properly when students or faculty members fear punishment for expressing views that might be unpopular with the public at large or disfavored by university administrators.

Generally speaking, academic freedom protects professors’ freedom to teach how they want, in keeping with the standards of their field, and to share their opinions on matters of public concern. Regardless of political viewpoint, a professor is permitted to promote and endorse his or her viewpoints, including during class time, provided that the discussion is germane or brief.

It is particularly disappointing that this curricular ban is advancing in Florida where the Governor successfully urged all public institutions of higher education in the state to adopt a version of the “Chicago Statement,” a document which commits those institutions to uphold free speech on college campuses. The document explicitly states:

Of course, the ideas of different members of our communities will often and quite naturally conflict. But it is not the proper role of our institutions to attempt to shield individuals from ideas and opinions they find unwelcome, our communities share in the responsibility for maintaining a climate of mutual respect, concerns about civility and mutual respect can never be used as a justification for closing off discussion of ideas, however offensive or disagreeable those ideas may be to some members of our communities.

Our fundamental commitment is to the principle that debate or deliberation may not be suppressed because the ideas put forth are thought by some or even by most members of our communities to be offensive, unwise, or immoral. It is for the individual members of our communities, not for the institutions, to make those judgments for themselves, . . . and to act on those judgments not by seeking to suppress speech, but by openly and vigorously contesting the ideas that they oppose. Indeed, fostering the ability of members of the college community to engage in such debate and deliberation in an effective and responsible manner is an essential part of our educational mission.

It is impossible to square the curricular ban in HB 7 with the principles of open inquiry in the “Chicago Statement” (which has been formally adopted by all public Florida two-and-four-year institutions of higher education at the Governor’s behest).

FIRE will remain opposed to this bill until the provisions that infringe on the academic freedom of faculty are removed.

Florida and other legislatures should take care to protect constitutional rights when legislating on how race, sex and gender are addressed in college classrooms. Legislation in Mississippi provides an example of how a bill can avoid some of the unconstitutional restrictions on academic freedom seen in HB 7 and also safeguard students’ freedom of conscience.

In Mississippi, Senate Bill 2113 takes a different approach. Rather than prohibiting what is taught in college classrooms, it prohibits public colleges and universities (as well as K-12 schools) from compelling students to personally affirm, adopt or adhere to specific political viewpoints. The bill states:

(1) No public institution of higher learning, community/junior college, school district or public school, including public charter schools, shall direct or otherwise compel students to personally affirm, adopt or adhere to any of the following tenets:

(a) That any sex, race, ethnicity, religion or national origin is inherently superior or inferior; or

(b) That individuals should be adversely treated on the basis of their sex, race, ethnicity, religion or national origin.

(2) No public institution of higher learning, community/junior college, school district or public school, including public charter schools, shall make a distinction or classification of students based on account of race, provided that nothing in this subsection shall be construed to prohibit the required collection or reporting of demographic information by such schools or institutions.

(3) No public institution of higher learning, community/junior college, school district or public school, including public charter schools, shall teach a course of instruction or unit of study that directs or otherwise compels students to personally affirm, adopt or adhere to any of the tenets identified in subsection (1)(a) and (b) of this section.

This bill, although portrayed as a typical bill seeking to ban the teaching of critical race theory, has language that is much more limited than the Florida bill and focuses on prohibiting compelled expression. Indeed, protecting a student’s freedom of conscience is a laudable goal for a state legislature. FIRE has previously cautioned that “liberty cannot exist in a society in which people are forced to conform their thoughts and expression to an official viewpoint.” Additionally, we have published an entire “Guide to First-Year Orientation and Thought Reform on Campus” which states:

[a] professor may have ground rules to ensure civility and order, and a professor should insist upon mastery of a subject (while protecting a student’s right to reasoned dissent), but a professor has no right to demand ideological uniformity.

To be clear, while the language in the Mississippi bill is much better than that of bills that include curricular bans, it is still imperfect and warrants further revision. We are concerned that this bill, similar to a 2021 Idaho law, could be read as prohibiting professors from being able to require students to engage in academic role-playing exercises or to engage in devil’s advocacy. The bill makes a point of saying that students cannot be compelled to “personally affirm, adopt or adhere” to the listed tenets, but that language could be improved to ensure that assigning roles in debates, for example, is protected even if the student disagrees with the proposition they are required to defend.

Language prohibiting “distinction or classification of students based on account of race” is unconstitutionally vague.

Although it is not the only way to grammatically read the provision,  interpreting the current language to protect professors’ ability to assign positions in contexts like debates, is the only correct reading consistent with the protections of academic freedom guaranteed in Sweezey and Keyishian. Of course, public institutions of higher learning may misconstrue the bill and limit the academic freedom of their professors. Accordingly, we encourage the Mississippi legislature to leave no doubt that within the classroom or as a part of an assignment, faculty are permitted to ask students to put themselves in the shoes of advocates whose views they don’t personally hold.

We also generally agree with the ACLU of Mississippi that the language prohibiting “distinction or classification of students based on account of race” is unconstitutionally vague. If the language represents an attempt to prevent an institution from limiting enrollment into particular classes on account of race, clearer language should be used.

Notwithstanding these shortcomings, Mississippi SB 2113 provides a guide for how a much narrower bill can avoid the key constitutional issues presented in the Florida bill and others. There is a tremendous difference between dictating what viewpoints can be expressed in a college classroom and prohibiting institutions from compelling students to adhere to those viewpoints in their personal capacities.

FIRE hopes both of these bills are amended to fix their constitutional defects, if they are to be enacted. We will continue to monitor bills that affect academic freedom, and remain eager to work with legislators throughout the country to ensure their legislation does not infringe on the crucial rights of students and faculty, or even better, that it actively provides statutory protections for academic freedom.