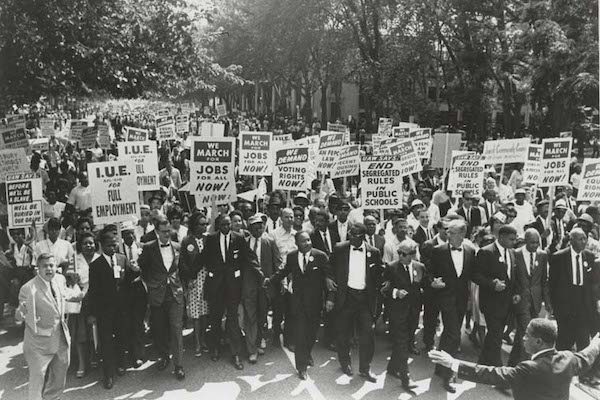 The evening before Rev. Martin Luther King Jr. was assassinated at the Lorraine Motel in Memphis, Tennessee, he delivered what many believe to be one of his most powerful speeches.

“We’ve got some difficult days ahead. But it really doesn’t matter with me now, because I’ve been to the mountaintop,” Dr. King declared to an overflowing audience at the Church of God in Christ on April 3, 1968. “And I’ve looked over. And I’ve seen the Promised Land. I may not get there with you. But I want you to know tonight, that we, as a people, will get to the promised land.”

Although the speech is well known today for King’s soaring rhetoric and Biblical allusions — as well as King’s ominous foreboding that he would not live a long life — much of the speech concerned the Memphis Sanitation Workers, who were on strike for better working conditions and higher wages. In response to the group’s plan to hold a peaceful protest on April 4, the city of Memphis asked the U.S. District Court for the Western District of Tennessee to issue an injunction to prevent the march, citing violence that erupted at a previous protest on March 18.

“Now about injunctions,” King said to the crowd. “We have an injunction and we’re going into court tomorrow morning to fight this illegal, unconstitutional injunction.” He continued:

King’s determination, not only to hold the march, but to fight in the court of law for the right to protest, underscores a lesser-known aspect of the Civil Rights Movement: that peaceful protests not only appealed to the moral conscience of the average citizen but were also vehicles for advancing civil rights — especially First Amendment rights — in courts of law so as to establish lasting legal precedents that would protect the constitutional rights of future generations.

“Nearly all the cases involving the civil rights movement were decided on First Amendment grounds,” according to University of Columbia law professor Jack Greenberg, who served as the director-counsel of the NAACP Legal Defense and Educational Fund from 1961 until 1984. These include seminal Supreme Court cases such as Garner v. Louisiana (1961) and ​​Edwards v. South Carolina (1963), which civil liberties groups — including FIRE — rely on today.

In Garner, the Supreme Court overturned the convictions of five African American students from Southern University who were arrested and charged for disturbing the peace after engaging in a sit-in at a segregated, all-white lunch counter at a drugstore in Baton Rouge. In a unanimous decision, the Supreme Court ruled the students’ actions were protected by the First Amendment.

“We would surely have to be blind not to recognize that petitioners were sitting at these counters, where they knew they would not be served, in order to demonstrate that their race was being segregated in dining facilities in this part of the country,” Justice John Marshall Harlan wrote in his concurring opinion. “Such a demonstration, in the circumstances of these two cases, is as much a part of the ‘free trade in ideas’ . . . as is verbal expression, more commonly thought of as ‘speech.’” 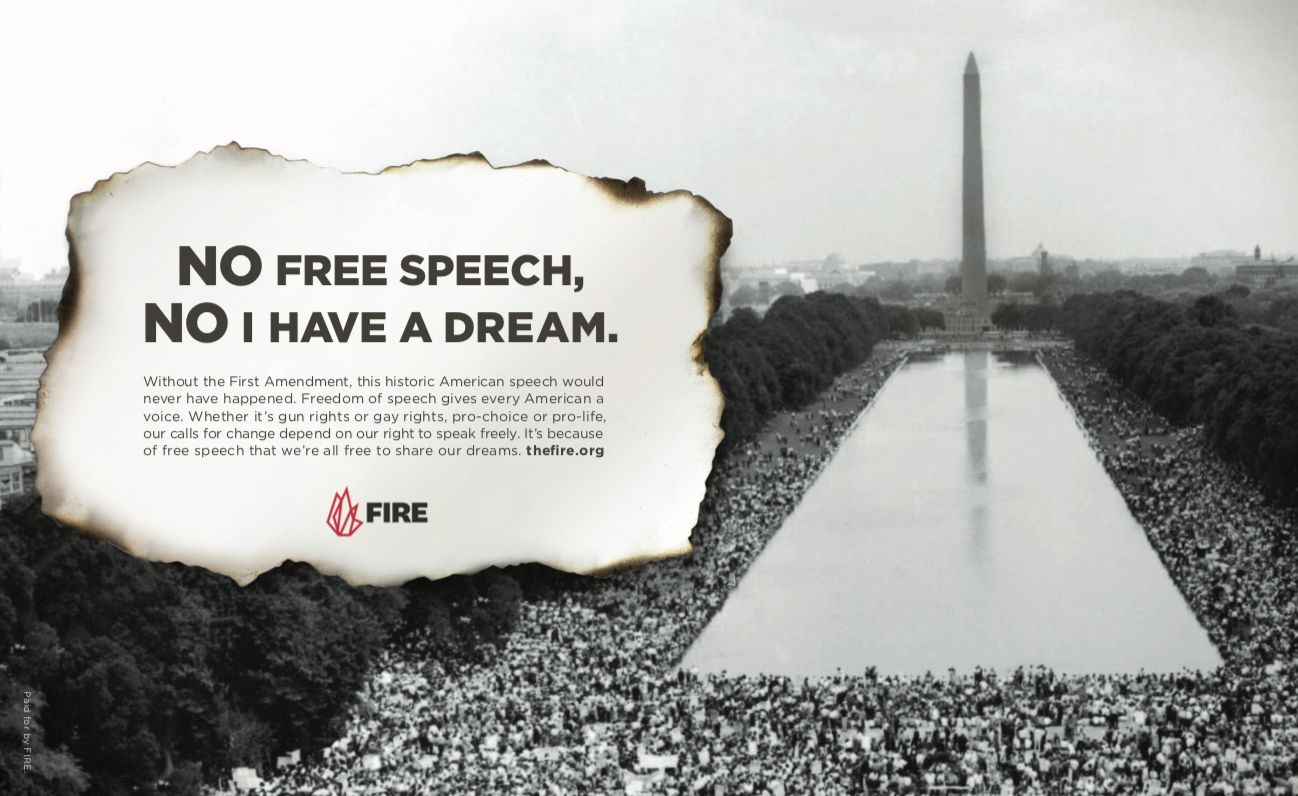 FIRE’s forthcoming advertisement in Sunday’s The New York Times Magazine, which can be found on the inside cover spread.

Similar reasoning was applied in Edwards, where the Supreme Court overturned the convictions of 187 African American students who were arrested following a demonstration, held outside of the South Carolina State House, to end segregation. The authorities, who claimed that the protesters were “boisterous,” “loud,” and “flamboyant,” asserted that the protest disturbed the “public tranquility.” Once again, what started as a peaceful protest ultimately became a legal means to challenge what King referred to as “unjust laws” in his famous “Letter from Birmingham Jail.” In this case, the Supreme Court found that the protesters’ First Amendment rights to freedom of speech, association, and petition had been violated by the state of South Carolina:

It has long been established that these First Amendment freedoms are protected by the Fourteenth Amendment from invasion by the States . . . The circumstances in this case reflect an exercise of these basic constitutional rights in their most pristine and classic form. The petitioners felt aggrieved by laws of South Carolina which allegedly “prohibited Negro privileges in this State.” They peaceably assembled at the site of the State Government and there peaceably expressed their grievances.

Although King was not directly involved in either of these landmark cases, he was involved in many others, and fighting the injunction sought by the city of Memphis would turn out to be King’s final legal victory. Shortly before delivering his “Mountaintop” speech, King met with lawyers in his room at the Lorraine Motel to review their legal strategy, as he had surely done countless times before, charting a path forward for lasting change.