Last week, Drexel University placed political science professor George Ciccariello-Maher on involuntary leave and barred him from campus, citing a “growing number of threats” directed at him over his personal political views. (As of yesterday, he was allowed to resume teaching his undergraduate courses — but only by “synchronous online instruction.” In other words, via video.) Ciccariello-Maher’s suspension was the culmination of months of outrage over his tweets, beginning with a tweet that first drew anger from white nationalists before the mainstream media picked it up — with, apparently, help from @TEN_GOP, the “Unofficial Twitter of Tennessee Republicans,” which, it turns out, was actually operated by the Russia-based and Kremlin-linked Internet Research Agency.

In other words, Drexel University launched an investigation into a professor’s off-campus speech, then suspended him, after a Russian “troll farm” helped send his tweet viral.

“All I Want for Christmas is White Genocide,” tweeted from Ciccariello-Maher’s personal Twitter account (“My views, not those of Drexel U,” reads the bio.) on Christmas Eve, seemed unlikely to get more than a laugh from his followers.

To most of the tweet’s eventual audience, happily divorced from the terminology deployed by white nationalists, “white genocide” would sound like a call for the systematic murder of white people. But Cicciariello-Maher was, in fact, mocking “white genocide,” referencing a theory espoused by white nationalists. The phrase, as The Atlantic described it, is “a watchword among white supremacists for immigration and fertility trends that could lead to whites losing their majority status in U.S. and European populations in the coming decades.” (One early critic of Ciccariello-Maher’s tweet described it as “the genocide of the white race by immigration and other measures… .”)

Ciccariello-Maher explained his use of the term on December 27, saying that “‘white genocide’ is an idea invented by white supremacists and used to denounce everything from interracial relationships to multicultural policies… . It is a figment of the racist imagination, it should be mocked, and I’m glad to have mocked it.”

A search of tweets mentioning “@ciccmaher” shows how the tweet went viral — beginning with a retort by author Lauren Southern that garnered 182 retweets. A Breitbart freelancer picked up the story early in the afternoon, with a tweet gathering just north of 200 retweets. Jason Kessler, one of the organizers of the “Unite the Right” rally in Charlottesville, told the Breitbart author that he was making it part of his “agenda” to “clean out these campus scum from the bottom up.” In a now-deleted blog post, Kessler called on his readership to contact Drexel administrators and demand “intellectual diversity on college campuses so that sociopathic Marxists aren’t given free reign to indoctrinate our youth.”

But one side of this Christmas Day skirmish soon got a boost from some Tennesseans. Or did it? 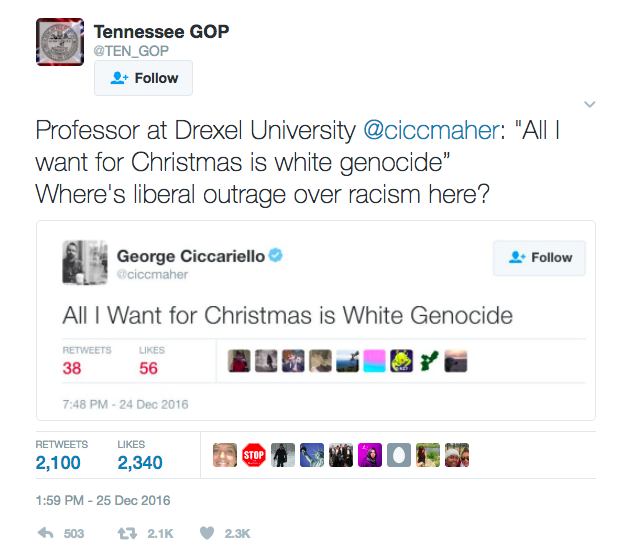 From there, the tweet took off, gathering steam in more mainstream outlets. @TEN_GOP’s tweet even found its way into a USA Today explainer on the kerfuffle.

Before midnight, Drexel would respond to the Twitter firestorm with a Yuletide tweetstorm of its own, including a statement declaring Ciccariello-Maher’s tweet “deeply disturbing,” but adding that Drexel “recognizes the right of its faculty to freely express their thoughts and opinions in public debate.” But in the months that have followed, Drexel’s steps in private continue to depart from its public declarations of support for academic freedom and freedom of expression.

Indeed, in this weird case, there are many things that are not what they claim to be.

@TEN_GOP, was not, as it claimed to be, the organic anger of Republicans from Tennessee. Rather, @TEN_GOP was the product of the Internet Research Agency, a Russia-based “troll farm” not heretofore known to employ many Americans hailing from the Volunteer State. Instead, it was, as described by The New York Times in 2015, “employing hundreds of Russians to post pro-Kremlin propaganda online under fake identities, including on Twitter.” According to a report first made by Russia-based RBC, citing documents and both current and former employees of the agency, @TEN_GOP was one such fake account. Reporters with the Daily Beast — Betsy Woodruff, Ben Collins, Spencer Ackerman, and Kevin Poulsen — confirmed @TEN_GOP’s Internet Research Agency origin, citing a source familiar with the account and evidence purporting to show that the account was linked to a Russian cell phone number.

FIRE has no special insight as to the ultimate purpose of @TEN_GOP and similar accounts, or why it would draw attention to Ciccariello-Maher’s tweet. Although alleged Russian efforts to shape the 2016 U.S. presidential election dominate the news, the “White Genocide” tweet occurred well after the election, and other efforts ascribed to the agency include encouragements of black activists opposed to police brutality. But if @TEN_GOP was in fact a product of the Russian “troll farm,” it represents a foreign effort to shape American discourse — an effort that involved stoking the anger of white nationalists and people who didn’t understand the context of mocking “white genocide” theories.

That’s not to say that Americans might not have picked up on this tweet in similar fashion (as did Breitbart News), or ultimately managed a similar cascade of results. And, obviously, an argument does not automatically lose its validity simply because it comes from Moscow rather than Memphis. But it does indicate that a foreign government not only understands the divisive power of efforts to silence dissenting voices on campus (and therefore may continue to promote such efforts) but has also demonstrated a concrete ability to negatively affect free expression and academic freedom in the United States.

Although Drexel has publicly told faculty members that they enjoy freedom of expression, its actions behind closed doors and in the months since have not reflected that commitment.

In February, Drexel informed Ciccariello-Maher that it was forming “a special committee of inquiry” in order to “investigate [his] conduct,” with the goal of providing “findings and recommendations . . . concerning [his] extremely damaging conduct.”

Launching a special committee to investigate “conduct” (words) is chilling in and of itself, but especially so when the expected conclusions are contained within the committee’s charge: It was conduct, not speech; it was Ciccariello-Maher who was responsible for the “volume of venomous calls” and threats, not the callers or threateners. Too often, such committees end up taking the attitude of “Show me the man and I’ll find you the crime.”

FIRE asked Drexel to abandon its investigation and got a perfunctory response, criticizing FIRE for “misunderstanding,” while providing no information that would explain what we misunderstood. There has been no public indication that Drexel — nearly nine months later — has abandoned or concluded its investigation.

The threats, however, continue.

Following the shooting in Las Vegas, Ciccariello-Maher’s tweets — questioning whether mass shootings had a racial component — again made waves in conservative media outlets, which often repeated the “white genocide” tweet.

“If you’re that incompetent and hateful,” asked Bill O’Reilly, “shouldn’t the university remove you from the classroom?”

On October 11, citing a “growing number of threats” directed at Ciccariello-Maher, Drexel placed him on involuntary leave. The American Association of University Professors quickly wrote to Drexel, perhaps leading the university to permit him to resume teaching — albeit only by video.

In an email to Ciccariello-Maher’s students following the AAUP’s criticism, Drexel provost M. Brian Blake remarked: “As provost, I am perhaps the most present advocate for academic freedom . . . In my role, I defend George’s academic freedom on a daily basis. As such, our latest action had absolutely nothing to do with the content of his extramural speech.”

The first line of defense

Ciccariello-Maher’s removal from the classroom, which was premised on threats of violence against him sparked by his extramural speech, obviously has everything to do with the content of his speech. Drexel’s move here places it on a disastrous course for two reasons.

First, wherever there is anger at the expression of a view, there is a possibility of threats against the speaker. If authorities can restrain the speaker by reciting the existence of threats — and citing a need for security often arouses sympathy — then few viewpoints are safe, on campus or off. Universities must not allow anyone, including white nationalists or foreign interests, to determine who can speak or teach on campus by issuing threats.

Second, behavior that gets rewarded will be repeated. If university administrators are quick to launch investigations, exile speakers, or mete out punishment as an expedient tool to deter threats of violence, it will incentivize threats.

For purposes of freedom of expression, it doesn’t matter which group was angered by Ciccariello-Maher’s views, nor whether their anger was even sincere or organic. What matters is that Drexel University succumbed to the anger and threats, launching an investigation and setting in progress a path which now leaves Ciccariello-Maher exiled from his academic community.

University administrations are the first line of defense protecting the independence of the academy from the censorious impulses of others, whether those calls or efforts originate from social media, students, legislators, the federal government, or foreign entities.

As we explain a letter sent to Drexel today, so long as it maintains its current posture, Drexel remains unwilling to bear that burden.