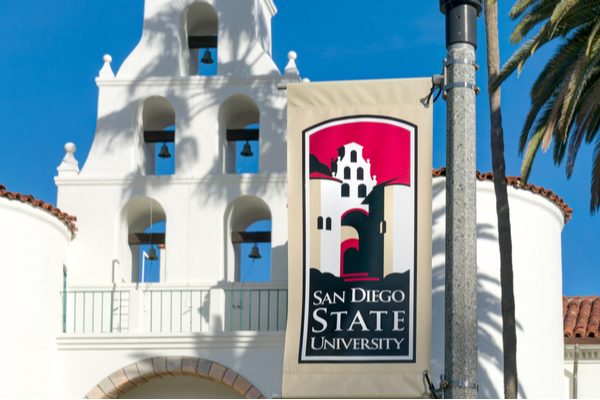 In order to teach students about the portrayal of racist ideology in film and television, San Diego State University professor Robert Jordan did what many professors do — he used an example to illustrate his point.

The evidence that Jordan’s accusers have to support their claims of racism consists of nothing but a short video clip and a few cherry-picked posts, all carefully stripped of the very contextual information that would disprove those claims.

As seen in a video clip of a lecture he gave about the history of discrimination onscreen, Jordan gave an example of racism using a hypothetical racist filmmaker: “I might have an assumption that Black people are just not as intelligent as white people. Oh, I can hear already people getting all riled up … That was the way I was raised. That’s just the way that you know my values are … Maybe in my head I am saying, ‘Well isn’t that the way everybody thinks?’” Jordan prefaced the hypothetical with a caveat that he didn’t believe in the statements at all.

Neglecting to provide any context for the short clip, however, a student uploaded it to Twitter with the caption, “my film teacher @SDSU ROBERT JORDAN!! wtf is this ????” Within hours, the tweet received dozens of comments and was shared almost 700 times, with most commenters accusing Jordan of racism. Some Twitter users scoured Jordan’s personal social media accounts for evidence of racism. One user shared a pro-Trump post on Jordan’s Facebook page as proof of his bigotry and demanded that he be fired immediately.

So it does reflect his personal views, he needs to be fired immediately pic.twitter.com/EK9nscqV3x

Another took a screenshot of an article Jordan shared, cropping out the bottom of the post where Jordan noted that he didn’t necessarily condone the article’s views.

This is the person your school is defending @SDSU pic.twitter.com/UIaNGRBPXY

After being tagged by multiple Twitter users, SDSU responded to the backlash with its own tweet defending Jordan, explaining:

In the :50 video, the professor gives an example of a racist view or ideology. Professor Jordan insists that the clip in no way represents his personal views or opinions … The goal of the course is to discuss how television and film, through portraying these very real, racist events in history, are able to help viewers better understand the plight and continued struggles of people with different backgrounds or identities than their own.

SDSU is right to defend Jordan, who appears to have merely been doing his job as a professor. It shouldn’t have come as a surprise that a professor would enhance a lecture on racism in film with an example of how racist filmmakers can influence films. The evidence that Jordan’s accusers have to support their claims of racism consists of nothing but a short video clip and a few cherry-picked posts, all carefully stripped of the very contextual information that would disprove those claims.

As an employee of a public institution, Jordan’s freedom of expression is protected by the First Amendment. In today’s environment, it is commendable that SDSU would support him, but a supportive tweet shouldn’t have been necessary in the first place.

This episode is a stark reminder that viral video clips often lack essential context. Any professor worth his or her salt uses examples that challenge students to think deeply. Jordan — and all professors — have the right to play devil’s advocate in the classroom without fear of losing their jobs over the baseless accusations of a Twitter mob.

If you are a faculty member whose rights have been violated, please contact FIRE.