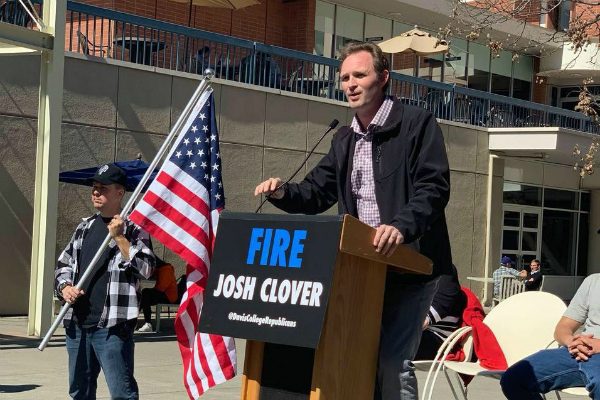 On March 8, FIRE wrote to University of California, Davis chancellor Gary May in response to reports that professor Joshua Clover was under investigation for years-old comments regarding law enforcement, despite the university’s initial statement upholding his First Amendment rights. UC Davis has now confirmed to FIRE that Clover is not under investigation, an important update given a new resolution demanding Clover’s termination.

In late February, UC Davis student Nick Irvin published an investigation into Clover’s tweets in student newspaper The California Aggie. Among other comments, Clover had tweeted in 2014 that “I am thankful that every living cop will one day be dead, some by their own hand, some by others, too many of old age #letsnotmakemore.”

Chief Marketing and Communications Officer Dana Topousis initially, and correctly, explained to The Sacramento Bee that Clover could not be punished by the university because “[p]ublic statements like those made by Professor Clover are accorded a high level of protection under the First Amendment.”

Gallagher also wrote an op-ed calling for Clover’s firing in The California Aggie:

This is not about free speech or academic freedom. It is important to note that incitements of violence are not protected speech under the First Amendment. Calling for the death of a group of people is not a contribution to a discussion; it is the ultimate abolition thereof — to silence the other side forever. Would we tolerate his statements if they were made toward any other identifiable people group? Of course not.

We can begin to change the trajectory of our public dialogue by no longer tolerating this kind of invective. UC Davis can act now to take us higher and preserve the values and integrity of this university by terminating Professor Clover immediately.

As FIRE explained last week, this is actually about free speech and the First Amendment. Legislators, because of their special duty to uphold the Constitution, must avoid using their elected positions to pressure public institutions into punishing speech protected by the First Amendment.

Even worse, Gallagher introduced a House Resolution calling on UC Davis to terminate Clover. It reads, in part:

Resolved by the Assembly of the State of California, That the Assembly of the State of California supports free speech and the right of professors and students to express different ideas and engage in constructive dialogue in an environment that is free from violence and intimidation, but violent rhetoric that endangers individuals or a group of people should not be tolerated; and be it further

Legislators must reject this resolution as their duty to uphold the constitution cannot be squared with this blatantly unconstitutional effort to pressure a public institution to fire a faculty member for protected speech. It should go without saying, but if the Assembly “supports free speech and the right of professors and students to express different ideas,” it must oppose this resolution, not support it.

Gallagher also spoke at the rally — which advocated firing professor Clover for his speech — and said, “now we don’t even talk to people with other views.” He also stated that he supported debate where “[w]e don’t shout down others, (but instead) listen to the debate then discuss.” (Of course, Gallagher could more effectively advocate for open debate by not simultaneously arguing for universities to violate the First Amendment and fire professors whose views he despises.)

Ultimately, FIRE is pleased that UC Davis has reaffirmed that Clover is not under investigation, and hopes that universities facing similar controversies in the future will also choose to abide by their legal and moral obligations to free speech and the First Amendment.