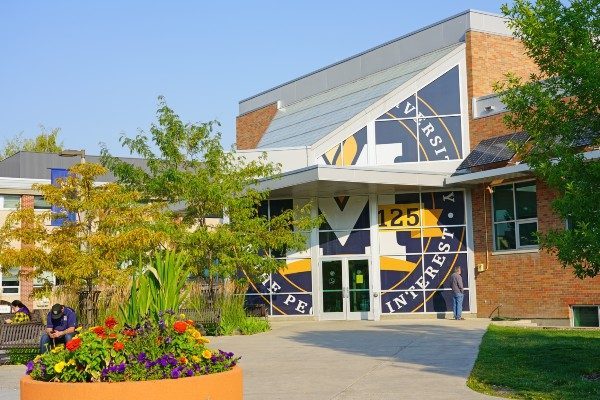 Student residence hall decorations come in many shapes and sizes, but there are a number of classic staples: Whether it’s Tom Cruise, John Belushi, Bob Marley, or The Beatles, some images will be forever associated with the wall of a freshman’s room. After all, posters are fun ways to signal one’s cultural literacy or to indicate a sense of humor and a desire to fit in with their peers. Oftentimes, the posters or displays will be hung where they are visible to people passing by outside the residence hall — which can attract controversy. Just last month, students at Harvard triumphed in a demonstration of their fandom after they hung a flag of Nicki Minaj in their window.

At Montana State University, Stefan Klaer and his roommates decided that they wanted to do something more than just pay tribute to cultural icons: They wanted to contribute to campus discourse. And so, at the beginning of the 2021 fall semester, they displayed a Black Lives Matter flag in their dormitory window. The flag was visible to people passing by the building, and was an attempt by the students to keep the BLM movement — a prominent part of political discourse over the last year and a half — from fading from memory as the summer of 2020 retreats in the rearview mirror.

But the students soon received notices to take down the flag. The first was posted on their dorm room door during the week of Sept. 5, and it notified them that the flag posed a potential fire hazard. Then, a week later, their resident advisor texted, asking them to take the flag down, in part because of the forewarned potential fire hazard. But the RA added that “my boss also said that hanging things in public view can be offensive,” even though the text message also noted that no one had reported taking offense to the flag.

After briefly removing the flag, the students put the flag back up in their window, where it remains today. On Oct. 25, FIRE wrote to Montana State asking the university to clarify its safety policies and communicate to the students that the flag can remain up without fear of administrative reprisal. 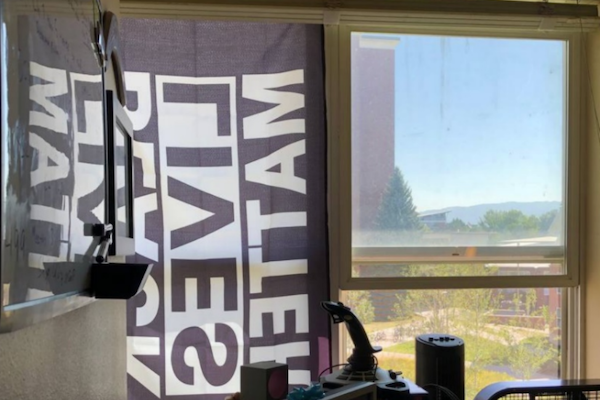 Students at Montana State University have refused to remove this Black Lives Matter flag from their dorm room window.

As a public university, Montana State is bound by the First Amendment to respect the expressive rights of its students. In cases like Ward v. Rock Against Racism, courts have established that government entities such as public universities may place “reasonable restrictions on the time, place, or manner of protected speech.” However, any such restriction must be content-neutral and narrowly tailored to serve a significant government interest. Indeed, public universities are significantly restricted in how they can regulate student speech, and must be careful not to impose restrictions that cross the line into unconstitutionally stifling student expression.

Montana State’s Community Standards guidelines state: “Due to potential safety concerns and fire hazards, posters and/or decorations cannot be placed on the window. Hanging blankets, sheets, tapestry etc., that physically or visually restricts or blocks access to the room is prohibited.”

The flag was in compliance with the enforceable provisions of this policy because it was not placed on the window, but rather on the blinds, a minor but still vital distinction. As FIRE wrote in our letter:

Klaer’s flag conforms to these provisions. It is affixed to the blinds, not to the window, and does not physically block access to the room. Provided that a flag is not fixed to the bottom of the window, as the policy stipulates, it would not block physical access to a room, as a flag could be easily moved aside or moved along with the blinds. The students’ flag is therefore in line with these provisions of the policy.

But the policy proceeds to muddy the waters where it prohibits “visually” restricting access to the room. This restriction does not advance a university interest, and it is not a reasonable restriction, as students have a reasonable expectation of privacy in their dorm rooms, one of the few places on campus where they expect solitude.

Montana State’s own policies agree on this front. The school’s policy on video surveillance states: “Video surveillance of areas for security purposes shall be limited to public areas and will not be used in bathrooms, changing rooms, individual dormitory rooms or other areas where there is a reasonable expectation of privacy.” (Emphasis added.)

If the university required removal of the BLM flag, but not other flags displayed in windows, then this would not only fail to advance any legitimate safety interest, it would be an unacceptable viewpoint- and content-based restriction of speech.

Notably, there is no functional difference between displaying the flag, effectively blocking sight into a room, and simply lowering the blinds, which would also block sight into a room. And much like blinds, flags can be moved aside or lifted in case of an emergency when physical access to the room would be required. Blocking the display of the flag on these grounds would pose an unwarranted and unnecessary restriction on student speech. And students have a right to expect visual privacy in their dormitory rooms, as Montana State stipulates, and a flag serves essentially the same purpose as blinds do.

The university has a commendable provision in its free expression policy concerning what to do if a student observes a window display they disagree with politically. The policy endorses the same solution FIRE endorses: more speech. In the FAQ concerning the policy, the university presents a case where a “residence hall window has a visible political message posted on it.” The policy encourages students to “​​Rebut the message with a sign in [a student’s] own window.”

Montana State must apply this policy consistently. If the university required removal of the BLM flag, but not other flags displayed in windows, then this would not only fail to advance any legitimate safety interest, it would be an unacceptable viewpoint- and content-based restriction of speech.

Students residing on college campuses have limited avenues to express their speech. While there may be reasonable restrictions on how students express themselves on campus, these restrictions must serve a significant governmental interest, e.g., protecting against a legitimate public safety risk. Restricting outward political displays — one of the few methods by which students can express themselves on matters of political, social, or personal concern — is not related to any such public safety rationale.

Montana State already acknowledges the need to protect student speech — the university must now clarify its policies to facilitate student displays in windows of their residences if they do not pose a reasonable safety risk, and to reaffirm that students have an expectation of visual privacy in their rooms. To leave the policies unclear and apparently contradictory would cause an unacceptable chilling of campus discourse.