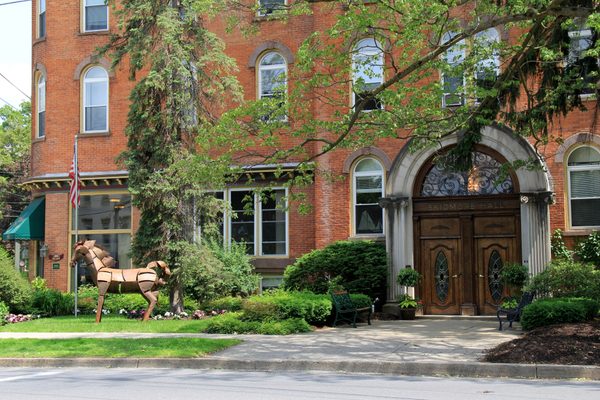 Skidmore College’s student government recognizes nearly 130 student groups, ranging from political organizations to dance clubs to religious groups, but it is refusing to recognize Progressive Zionists for Peace based solely on its viewpoint.

FIRE wrote to Skidmore today, explaining that the decision not to recognize PZP violates the college’s strong promises of freedom of expression and freedom of association.

PZP is a proposed student organization at Skidmore with a mission to “create a space for pro-Israel, pro-peace students to organize to act together on behalf of a two-state solution,” according to its founder, Skidmore student Nessa Goldhirsch Brown.

On March 12, the Skidmore student government’s club affairs committee — the body responsible for recognizing student clubs — heard PZP’s petition for a trial period to become a recognized student organization. The committee voted later that day to deny recognition to PZP. Goldhirsch Brown was informed the next day that the club had been denied recognition because “some members [of the committee] expressed concern that a dialogue focused club with one perspective being conveyed could be troublesome.”

Although the committee encouraged Goldhirsch Brown to re-apply for recognition next semester, its reasoning for denying the club is very clearly viewpoint-based discrimination that would be unlawful at a public school and which goes against the private Skidmore’s own policies.

FIRE wrote to Skidmore today, explaining that the decision not to recognize PZP violates the college’s strong promises of freedom of expression and freedom of association. FIRE also called on Skidmore’s student government to recognize the student organization on Friday, when it hears PZP’s appeal; otherwise, Skidmore’s administration must ensure that PZP is granted all of the rights and privileges attendant with formal recognition to comport with its laudable commitment to students’ expressive rights.

For example, the college’s Student Bill of Rights, which is included under the student government section of its Student Handbook, states that “students enjoy freedom of speech, peaceful assembly, the press, and religion, and the right to petition.” It also clearly extends these rights to student organizations, stating that students “are free to organize and join associations to promote their common interests.” This is exactly what PZP wishes to do.

The student government’s refusal to recognize PZP is premised on the possibility that members’ “dialogue” — a form of expression — may be “troublesome.” But what kind of dialogue can’t be troublesome? The possibility that students may disagree with each other is a risk that colleges and universities like Skidmore take, and should take, if they promise free speech and claim to deliver a liberal education.

Skidmore clearly extends expressive and associational rights to student organizations, stating that students “are free to organize and join associations to promote their common interests.” This is exactly what PZP wishes to do.

The committee’s reasoning that the club cannot be both “dialogue focused” and convey “one perspective” implies that there’s a problem with an organization being multifaceted and encouraging debate. However, as we reminded Skidmore in our letter, “it is irrelevant whether PZP is an advocacy group, an organization devoted to debate and dialogue, or something in between, as all of those missions are equally protected by principles of free expression and association.” If anything, an organization’s encouragement of debate and discussion should be seen as a positive in a college setting where the open exchange of ideas is essential.

The fact that PZP was denied recognition makes even less sense considering that the student government’s stated reasons for the denial could easily apply to any number of other student groups. For example, Skidmore recently approved a pro-Palestinian group, Students for Justice in Palestine, for a trial period for student government recognition. (FIRE routinely defends SJP chapters from similar viewpoint discrimination.) It’s doubtful that all members of SJP agree on all policies and decisions by Palestinian political actors, which regularly result in controversy. Yet Skidmore did not deny SJP based on the possibility of debate and dialogue, which is an inevitable feature of any advocacy-based group. This can also be said for other Skidmore recognized student groups, including the College Democrats, College Republicans, Feminist Action Network, Voices for Planned Parenthood, and more.