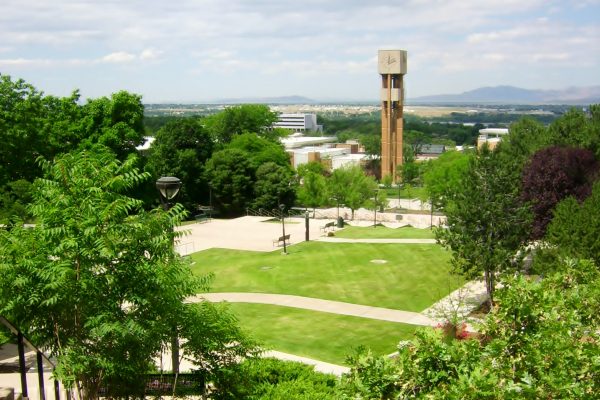 Yesterday, Weber State University placed tenured professor Scott Senjo on “administrative leave,” removing him from teaching online courses — a day after announcing an investigation into “abhorrent” tweets endorsing violence against journalists, protesters, and rioters. Today, after asserting that the university demanded his resignation (which it denies), Senjo acquiesced, apologizing for the “recklessness” of his tweets, which he said he made “in the oftentimes vulgar, extreme back-and-forth that can occur on Twitter and they were simply wrong.”

One post was a response to a video of a police car driving into a crowd of protesters in New York City while they were demonstrating against deadly force by officers. That action has been criticized both by the New York police commissioner and mayor, along with those at the rally who say they feared being run over.

Senjo wrote: “That’s not how I would have driven the car into the crowd.”

The professor also responded to a black reporter Sunday who was covering the protests. Tyler Blint-Welsh of the Wall Street Journal said he was hit in the face by a New York police officer and pushed to the ground — after showing his press badge. Senjo told Blint-Welsh that if he were an officer, “you wouldn’t be able to tweet.”

The violence endorsed, or hoped for, by Senjo would very obviously violate the First Amendment, at least when the hand swinging the club is employed by the state. Indeed, on the same day that we wrote to Weber State, FIRE also wrote to Ohio State University, where student journalists were assaulted by officers of the Columbus Division of Police in clear violation of the students’ First Amendment rights. The use of state violence against journalists and peaceful protesters unequivocally abridges the First Amendment.

Yet hoping for or even endorsing the use of violence is, itself, protected by the First Amendment. None of the tweets at issue amount to a true threat or incitement, both of which are not protected speech.

In times of great societal upheaval and political turmoil, it is imperative that educational institutions remain firm in their commitments to freedom of expression.

As our letter yesterday to Weber State University’s president explained, when faculty members speak as private citizens on matters of public concern, a public university — a state institution bound by the First Amendment — cannot punish a professor’s extramural speech, even if it is deeply offensive to others. These legal and moral principles are what prevent universities from foreclosing on faculty members’ academic and expressive freedom whenever someone — whether a member of the public, a pundit, or a government official — finds their views offensive. That sometimes means, as Justice Harlan noted in upholding the right to wear a jacket emblazoned with the words “Fuck the Draft,” that there appears to be a “verbal cacophony” of inflammatory or offensive remarks. That’s a necessary byproduct of the principle that “governmental officials cannot make principled distinctions” between what speech is worthwhile and what expression is too offensive.

The First Amendment, it is often said, doesn’t protect you from the consequences of your speech. To a certain extent, that’s true: it does not prevent you from being subjected to caustic criticism or social consequences flowing from your speech. These are forms of “more speech,” the remedy to offensive speech. But it does limit who can impose certain consequences and what consequences they may impose. A government employer — especially a public university — violates the First Amendment when it initiates investigations, suspends faculty members, or demands resignations. It is doubtful that a resolution procured through unconstitutional pressure is truly voluntary, as we saw with an Iowa adjunct professor pressured into resigning over his affiliation with “antifa” and social media posts.

In times of great societal upheaval and political turmoil, it is imperative that educational institutions remain firm in their commitments to freedom of expression. It’s easy to defend freedom of speech in the abstract, as we often see in flowery statements by university leaders. It is much harder to defend when challenged by speech that many, if not most people, find deeply offensive.

In this stress test of its commitment to freedom of expression, Weber State University’s leaders utterly failed. The rights of Utah students and faculty of all views are worse off for it.