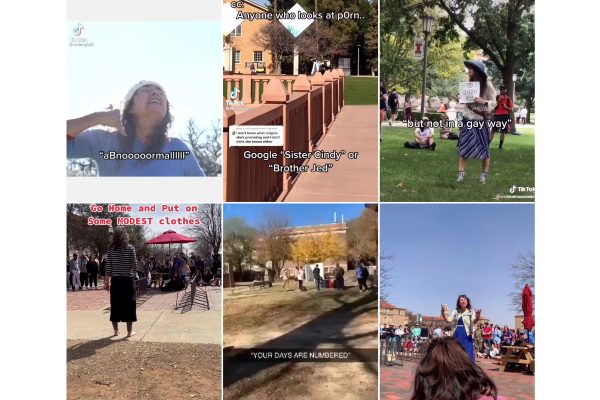 Love them or hate them, street preachers are a staple on and around college campuses. They can be boisterous and aggressive, and sometimes appear to be committed to offending the sensibilities of passers-by. But the content of their speech is usually protected by the First Amendment, even if some or many find it offensive, and provided that they don’t engage in any otherwise unprotected speech. This leaves many students wondering what they can do to respond to the presence of street preachers.

Students have created a somewhat symbiotic relationship with the couple: students give the preachers the attention they seem to desire, and the preachers give students a forum in which to gather and express their own values in juxtaposition.

The common refrain of free speech advocates is that you should address speech you dislike with more speech — organize a counter-protest, write an op-ed, bring opposing speakers to campus, or otherwise participate in activities to help create the community you want to join.

Gen Z has put a new twist on the classic “more speech” approach. Armed with only their phones and a knack for short-form comedy, students have turned their interactions with longtime preacher duo Sister Cindy and Brother Jed into a viral phenomenon on TikTok.

This trend came to our attention after a video of students cheering as Sister Cindy declared “I’m here to do some good old fashioned slut-shaming” began circulating across the internet. An entire TikTok account that aggregates students’ interactions with the couple soon emerged and features students gathering around Sister Cindy to listen, engage with, and protest the couple (and even order pizza with her).

Interactions with the Sister Cindy even helped lead one student to begin a career in sex education and wellness.

@wellashleyy#duet with @brianaskins My favorite part of the day was when she asked me if we could be Facebook friends.♬ original sound – Brian

While many of these videos take a mocking tone, it seems that all involved have leaned into the interaction. Students have created a somewhat symbiotic relationship with the couple: students give the preachers the attention they seem to desire, and the preachers give students a forum in which to gather and express their own values in juxtaposition.

And the students’ innovation on the “more speech” approach hasn’t stopped at just sharing their interactions and stories. One of the fun features of TikTok is the ability to reuse the audio from others’ videos for your own content.

This has allowed users to convert Sister Cindy’s words into viral sounds which have taken on a life of their own — transforming her insults into a meme which they can use to proudly express their styles and bring light to other societal issues such as the unfair application of school dress codes and tension between sexworkers and the police.

This ability to react to and transform speech from the safety of one’s home shows how rhetoric one disagrees with can be a catalyst for further conversations and even comedy.

While people should always be cognizant of personal boundaries, you will be surprised over what can come from interacting with those you vehemently disagree with — even if it’s just 5 seconds of viral fame. Often there is more power in addressing or coming together to laugh off those you disagree with than in trying to silence them.