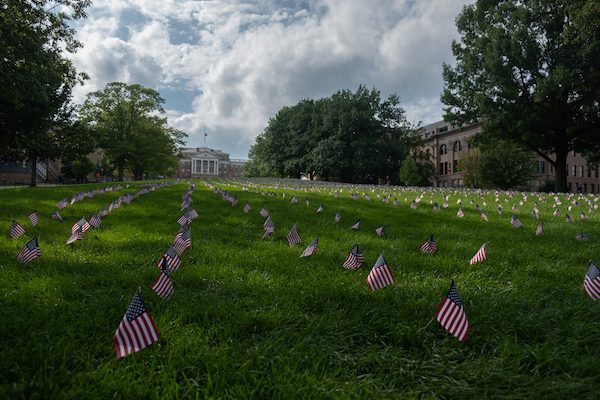 Correction (Sept. 21, 2021): After an investigation, University of Virginia campus police said the flags were likely blown over by the wind.

One of the more glaring ironies involving America’s response to the terrorist attacks on 9/11 is how the events, which were immediately and unequivocally described as assaults on freedom, also prompted demands for censorship and governmental oversight that have since been broadly recognized as unconstitutional.

On that fateful day, as news of the attacks reverberated on college campuses across the county, University of New Mexico Professor Richard Berthold joked that “anyone who can blow up the Pentagon has my vote.” In response to public outcry, UNM announced an investigation and removed Berthold from the classroom — despite the fact that his speech was, as morbid humor often is, protected by the First Amendment. Berthold wasn’t alone. As FIRE President and CEO Greg Lukianoff wrote a decade ago:

At San Diego State University an international student, Zewdalem Kebede, overheard students talking in Arabic expressing delight about the attacks. When Kebede challenged them, he was accused of engaging in “abusive behavior” and warned that any similar behavior in the future would result in “serious disciplinary sanctions.” At Penn State, a professor who advocated an aggressive military response to the attacks on his webpage received a letter from the vice provost for academic affairs chastising him for engaging in speech that was “insensitive and perhaps even intimidating.” (Keep in mind that engaging in “intimidating” speech was grounds for termination at Penn State at the time.) Meanwhile, at Johns Hopkins, a professor who publicly advocated going after the countries that supported al Qaeda and similar terrorist organizations found himself reprimanded and removed as the director of the university’s Central Asia-Caucasus Institute.

Every year since has seen more of the same, and this year is no different. The internet, now driven by social media, teems with calls for students and professors to be censored and punished for expressing their opinions on the attacks. In a welcome shift, administrators seem (at least somewhat) more willing to defend student and faculty rights to express divergent opinions on this contentious issue.

On Friday, Syracuse University political science assistant professor Jenn Jackson posted a series of tweets critical of the way many “white pundits and correspondents talk about” 9/11, including former White House chief of staff Andy Card’s assertion that 9/11 was the “first time that Americans ever felt fear.”

“White Americans might not have truly felt fear before 9/11 because they never felt what it meant to be accessible, vulnerable, and on the receiving end of military violence at home,” Jackson wrote on Twitter. “Plenty of us Americans know what it’s like to experience fear and we knew before 9/11.”

Syracuse has a poor track record when it comes to defending the expressive rights of students and faculty.

Backlash was swift, especially in conservative media and on Twitter, where users called for her termination — calls joined by the New York Republican Party after Syracuse refused to punish her. Jackson made her social media accounts private after the uproar that ensued.

Syracuse has a poor track record when it comes to defending the expressive rights of students and faculty. The university was the recipient of FIRE’s Lifetime Censorship Award last year. Therefore, when Syracuse’s leadership issued a welcome and strong defense of Jackson’s expressive rights, it was met with skepticism that it was sincere about standing for principle. A statement from the university’s Chancellor and President Kent Syverud and Maxwell School Dean David Van Slyke, read in part:

Some have asked the University to condemn the professor’s comments and others have demanded the professor’s dismissal. Neither of those actions will happen . . . Speech can be offensive, hurtful or provocative. Still, Syracuse University will stand by the principles of free speech and by our commitment to keeping our community safe in the face of threats and harassment.

As FIRE wrote yesterday, the university did the right thing by defending Jackson’s right to free expression, by not announcing an investigation to placate the mob, and by denouncing threats of violence against the professor: “Syracuse’s administration rightly rejected those calls in a public statement that, in many respects, should serve as a model for how to respond to calls for censorship.”

It must now work much harder than it has to model this behavior down the road.

In commemoration of 9/11, chapters of the Young America’s Foundation and the College Republicans student groups often organize flag displays at colleges and universities across the country. And, almost every year, some of these displays are dismantled or removed by students or strangers who oppose the flags’ message.

This year, numerous flag displays were tampered with, according to YAF. At the University of Virginia and Mount Holyoke College, flags were removed and scattered. The flag display at Michigan State University was tagged with spray paint.

At Washington University in St. Louis, student senator Fadel Alkilani was seen removing flags from the display and stuffing them into clear trash bags. When confronted by a member of the WU College Republicans, who recorded the interaction, Alkilani refused to comment and walked away.

Alkilani later released a statement denying removing the flags from the area, saying he planned to rearrange them as a form of counter-protest, arguing that the display including flags “amplifies pro-imperialist sentiment and actively disrespects those who have died because of American Invasion.”

“[M]y full protest did not have the chance to be actualized,” Alkilani wrote. “My planned protest was to place the bags of flags on Mudd field, along with various statistics . . . explaining the human cost of 9/11 in the past 20 years.”

“I did not deface, destroy, damage, nor steal any flags, nor did I interfere with any registered event time,” he wrote, and denied violating “any University Code of Conduct policy.”

Just as freedom of expression means you can burn your own flag, it doesn’t immunize you if you steal or burn a flag belonging to someone else.

The university rightly condemned Alkilani’s actions in a statement emailed to the student newspaper. The next day, WU Chancellor Andrew D. Martin responded in a more measured tone, explaining that the university had launched an investigation into the incident.

“We are taking appropriate steps to investigate this incident and will follow our standard protocols as we do so. Such steps often take time,” Martin said. “As we move forward, we will also ensure that the student involved has access to campus resources that are regularly available to students as he navigates the consequences of his actions, both on campus and beyond.”

Martin used the incident as a learning moment for the university community to reflect on their free speech rights:

As a university that considers freedom of expression to be a cornerstone of our institution, it’s important for all of us to recognize that, even when we disagree, we are one community. We must find ways to have difficult conversations and listen to one another while acknowledging that among us there will be differing intellectual outlooks and emotional experiences. Moments like this are certainly challenging, but if we take the opportunity to try to understand different perspectives, we will ultimately become stronger for the experience. Free speech has empowered – and challenged – college campuses across the country for generations. There are many lessons to be learned from our shared history, and my hope is that this distressing incident will be another such opportunity for our community. Ultimately, we must put respect and dignity above all else, as these are the values that will carry us forward.

That’s the right response. Assuming that the display’s curators had authorization to erect the memorial, the university can prohibit — and penalize — its vandalism or removal. Had Alkilani erected his own adjacent messages criticizing the display, a commitment to expressive rights would have protected that counterspeech.

Calls for Muslim academics to be disinvited from speaking event

Last Saturday, on Sept. 11, Rutgers University’s Center for Security, Race and Rights and San Francisco State University’s Arab and Muslim Ethnicity and Diaspora Studies program co-sponsored a panel discussion titled, “Whose Narrative? 20 Years since September 11, 2001.” The speakers were to include three individuals characterized by The Jerusalem Post as “academics who have in the past courted controversy in their engagement with terrorists and terrorist organizations,” including University of California, Berkeley lecturer and Students for Justice in Palestine co-founder Hatem Bazian, an outspoken critic of Israel.

“It is simply inconceivable, outrageous and inexcusable that your universities would in any way be associated with the forthcoming event this Saturday,” wrote the International Legal Forum, an Israel-based legal group, in a letter to SFSU, adding that the event may run afoul of federal anti-terror laws. That’s unlikely, and SFSU — to its credit — refused to cancel events in response to similar claims in the past.

Despite public outcry, the event proceeded as planned. A spokesperson for SFSU said in a statement to Jewish Journal that the event was “not being hosted by SF State. The University supports the academic freedom of our faculty to engage in intellectual debate and express individual viewpoints without fear of retaliation or censorship.”

Calls to disinvite speakers from campus events based on disagreement with the expected viewpoints or speech are an invitation to censorship. (While most noticeable around commencement season due to the high-profile status of many commencement speakers, disinvitations occur all year. FIRE has tracked speaking disinvites since 2015 in our Disinvitation Database.) Administrators should reject such calls out of hand, and FIRE is glad that SFSU and Rutgers did not accede to these calls.

There are few topics in American discourse that give rise to as much passion as the 9/11 attacks. That the conversation continues at all is a testament to the power of free speech to guide societies toward resolution on the most difficult and painful of issues.