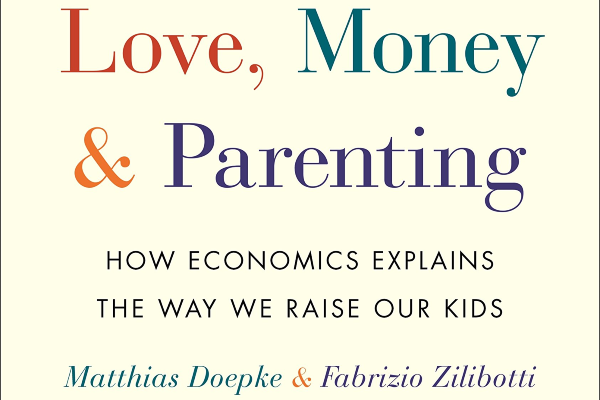 EDITOR’S NOTE: This is the sixth part of a multi-part series updating developments since the publication of “The Coddling of the American Mind: How Good Intentions and Bad Ideas are Setting up a Generation for Failure” (2018).

In “The Coddling of the American Mind,” Jonathan Haidt and I identified a total of six causal threads that helped explain why Gen Z (roughly the generation born from 1996 to 2015) is so different from prior generations in terms of everything from higher rates of anxiety and depression, to attitudes about freedom of speech.

One of those causal threads was “paranoid parenting,” which includes “safetyism,” and the irrationally exaggerated fear of extremely low probability events, like stranger kidnapping. We also discussed a slightly different type of parenting paranoia, focused on academic performance, starting as early as preschool and leading to the soul-stealing and anxiety-producing “resume arms race” to be accepted into the extremely limited spots at a handful of elite colleges, lamented by William Deresiewicz in “Excellent Sheep: The Miseducation of the American Elite and the Way to a Meaningful Life.”

Recently, I’ve been pondering whether there’s a seventh causal thread: The effect of what is commonly called “income inequality,” but which I prefer to call “U.S. income stratification.” Does the fear of their children landing in a lower socioeconomic status (SES) actually drive parental decision-making? 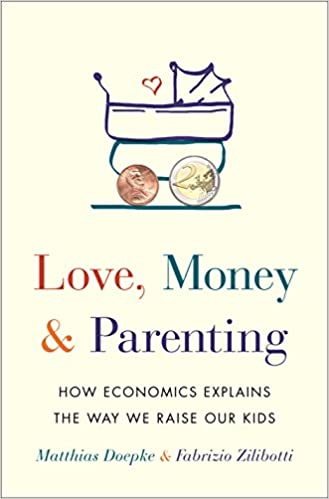 The book that most persuasively makes this argument is the truly excellent “Love, Money, and Parenting: How Economics Explains the Way We Raise Our Kids” by Matthias Doepke & Fabrizio Zilibotti. The authors argue that the rise in intensive parenting is a rational response from parents in countries with high income inequality trying to keep their children in, or get their children into, the upper economic classes. By contrast, many countries that have low income inequality, like those in Scandinavia, tend to have more permissive parenting styles, as a rational response to the comparatively low consequences of not excelling in education.

First, they demonstrate that income inequality has increased in Western nations over the past few decades, but is unusually high in countries including the United States and China:

Because COTAM is primarily concerned with the kind of students who go to elite colleges, and those students disproportionately come from households even higher up in the income distribution — especially the top one percent — this statistic from the book may be more important: In the U.S., “a family in the richest one percent earns thirty-eight times as much as a family in the poorest 10 percent.”

Dopeke and Zilibotti show that attendance at elite colleges in the United States provides a substantial income advantage over those who attend non-elite colleges. The authors also show that intensive parenting generally does produce better academic results. Because American elite education requires “near-perfect” grades and SAT scores in addition to an extraordinary number of extracurricular activities (TEN to ELEVEN extracurriculars for schools like Yale, Deresiewicz says), it is only rational that parents and children aspiring to placement in elite higher education would be under extraordinary stress.

The timing of the authors’ argument also makes particular sense. Interest in parenting styles dramatically increased over the second half of the 1990s, a period when income inequality increased dramatically, as demonstrated by this chart from the Economic Policy Institute:

One shortcoming of “Love, Money, and Parenting” is that it operates under its own definitions of parenting styles that differ from colloquial uses. For example, the book uses criteria for “intensive parenting” that would seem to encompass the parenting style that is generally described as “helicopter parenting” or “authoritative parenting.”

I often describe helicopter parenting as an unhealthy combination of intensive and permissive. In contrast, authoritative parents, according to the American Psychological Association, are:

[N]urturing, responsive, and supportive, yet set firm limits for their children. They attempt to control children’s behavior by explaining rules, discussing, and reasoning. They listen to a child’s viewpoint but don’t always accept it.

Looking forward to a lifetime of brutal competition 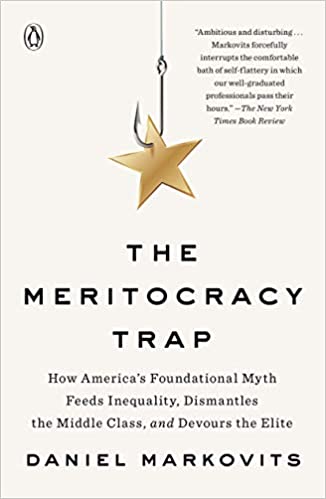 Another recent book really underscores how the desire to get into elite colleges, then graduate schools, and then to excel at those schools can foster an anxious, depressed, and exhausted worldview for students themselves, not just their parents. In “The Meritocracy Trap: How America’s Foundational Myth Feeds Inequality, Dismantles the Middle Class, and Devours the Elite” by Daniel Markovits, the Yale Law School professor paints a bleak picture of the competition and work expectations of elite college graduates.

In particular, he focuses on the absolutely brutal work expectations graduates of elite law schools face if they should choose to go into elite law firms and startups. I can attest that many of the people I know who went to elite law schools report absolutely insane work hours, high pressure deadlines, no personal time, and high rates of anxiety, depression, burnout, and more than a few breakdowns. I bristle, however, at Markovits’s seeming implication that these bright and shiny students have no choice but to go into these crushing work environments.

I was faced with precisely that choice and I chose to go the nonprofit route, as did many of the happiest lawyers I know. Still, the larger point — that in the U.S., students seeking placement in elite institutions may envision a potential future of seemingly never ending high-stakes competition for admissions, grades, and placement — maybe true for many, if not most, elite higher ed students, and could very conceivably result in a grim, depressing, and anxiety-producing outlook for both parents and children.

Why I prefer ‘U.S. income stratification’ to the phrase ‘income inequality’

The term “income inequality” has become the standard way to express that, in countries including the United States and China, the difference between those who make the most and those who make the average or the least is very high. But I find it somewhat troubling, or at least not precise, for a number of reasons.

The absolute most important reason is that globally, income inequality has been decreasing over the same period while laments about income inequality have gone up. In Hans Rosling’s excellent and highly recommended book “Factfulness: Ten Reasons We’re Wrong About the World — and Why Things Are Better Than You Think,” he points out that the impression of what “Third World” countries look like economically tends to be hopelessly locked in a picture that looks more like the abject poverty of the 1960s than the impressive economic growth of the intervening five decades.

As the distance between income levels grows, parental anxiety grows too; all parents want their children to have it at least as good as, and preferably better than, they had it.

In reality, global inequality — the disparity between incomes in rich and poor countries — is declining, and has been since 1980, driven by strong economic growth in Asia. The industrialization of India and China between 1980 and 2005 started to narrow global wealth disparity; now, places like Thailand, the Philippines, and Vietnam are experiencing a dramatic growth in economic activity and opportunity. Additionally, within many countries, overall wealth has dramatically increased. According to the United Nations, from 2008 to 2016, more than twice as many tracked countries saw declining inequality than increasing inequality.

I’m a first-generation American, and despite my focus on American law, I still often try to put things into a global perspective. One of the reasons why the American upper middle and upper classes have gotten so fantastically wealthy is because markets that used to include tens of millions of Americans now include billions of people all over the world that can now afford, for example, goods coming out of Silicon Valley. Success in the new millennium truly resides more in what Nassim Taleb dubbed Extremistan than Mediocristan. If we fail to understand the positive role liberalization and globalization has played for the American prosperity, we could make some policy decisions (e.g., extreme forms of trade protectionism) that harm overall global wealth.

But why U.S. income “stratification” instead of inequality? The term “income inequality” seems to imply that the ideal situation would be for everyone on the planet’s income to be equal. While we have come close to achieving this goal in the past, that has mostly been due to the huge majority of the world living in poverty. Income inequality is higher in modern Germany than was in 1960s China, after all.

I prefer “stratification” because it highlights that the problem is not that there are different levels of income, but that the top sections of the SES spectrum are pulling away from the rest in dramatic fashion. As the distance between income levels grows, parental anxiety grows too; all parents want their children to have it at least as good as, and preferably better than, they had it. If the most certain way to do that is to get their kids into an elite college, and that process requires absolutely intense focus, we shouldn’t be surprised that elite college students show up feeling worn out, paranoid, and anxious. Due to stratification, the effort just to stay in the upper SES is intense. Add in the fact that we are more economically segregated than ever, and a kid growing up in, say, Palo Alto may see ferocious competition as the only game in town.

As Kate Julian (who will be featured in the next episode of “Catching Up With Coddling”) pointed out to me, the intense anxiety of getting into elite colleges appears to only hit kids hard when they grow up in communities where others are expected to attend elite colleges. I know this from personal experience, too. Growing up in a lower SES, the idea of going to an elite college was nowhere on my radar. To many of the students I met at Stanford, however,  it had been a major childhood focus (and that was before income stratification really kicked into high gear).

And who could blame parents for not wanting their children to stay in or sink into the U.S. lower SES. For lower and working class people in the United States, the concern about income inequality is largely that their wages have been distressingly stagnant, even as wealth continues to accumulate at the top. Rising mortality rates among middle-aged non-hispanic white people, largely due to suicides and overdoses, have been described as “deaths of despair,” driven by “vanishing jobs” and “disintegrating families.” While we won’t know the full impact for quite some time, the pandemic has seemingly spread that economic stratification even farther and wider than before.

I am pretty persuaded that U.S. income stratification should be our new 7th causal thread. But if competition to get into the fanciest schools is motivated by parents’ anxiety over their childrens’ future SES, that surely goes a long way to explaining helicopter parenting, stress, and possibly even, to some degree, anxiety and depression in K-12 and beyond. I will run this by Jonathan Haidt to see what he thinks.

In our next edition of “Catching Up With Coddling,” we will be concluding our discussion of the paranoid parenting causal thread in a spectacular way… We will be featuring our first ever podcast episode, with an interview with Senior Editor at The Atlantic, Kate Julian!

Julian wrote a cover story “What Happened to American Childhood?” for The Atlantic, which argues that, rather than calculated parental risk-aversion, it may be parents’ own anxiety making a generation of kids more anxious. Furthermore, Julian shows how the “accommodation” of anxious children is an attempt to “prepare the road for the child, instead of the child for the road,” with potentially disastrous mental health implications.