FIRE > Newsdesk > The Eternally Radical Idea > Catching up with ‘Coddling’ part three: ‘Right-on-Left’ censorship is still a thing on campus

EDITOR’S NOTE: This is the third part of a multi-part series updating developments since the publication of “The Coddling of the American Mind: How Good Intentions and Bad Ideas are Setting up a Generation for Failure” (2018). See part one here and two here. Future articles can be found here. (This month marks the fifth anniversary of the original COTAM article, and this week marks the second anniversary of the publication of COTAM, the book.)

Today we will be updating the examples in Chapter 6 of the book, where we demonstrate that censorship on campus does not always look like the left-versus-right stereotype, and that professors and students still sometimes land in trouble for saying things that anger those on the right side of the political spectrum. These examples are especially worth noting while the country is grappling with ideas of cancel culture, and when some would have you believe cancel culture only targets conservatives.

In COTAM, my co-author Jonathan Haidt and I discussed the problem of conservative outrage mobs waging campaigns against liberal and left-wing professors, such as:

Way back in the late before times of January, professor Asheen Phansey at Babson College was terminated over a post criticizing Trump’s threat to bomb Iranian cultural sites by jokingly suggesting Iran bomb American cultural sites, such as the Kardashian residence. 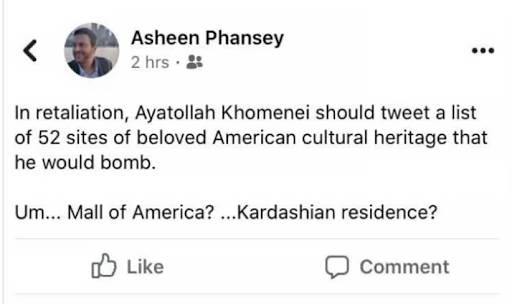 Conservative websites, either missing or ignoring the joke, stoked outrage, and many demanded his termination. After a “thorough investigation” lasting one day, Babson capitulated to the mob while claiming — falsely — they were doing so in cooperation with police.

Jesse Goldberg, a lecturer at Auburn University, was an unambiguous case of right-on-left censorship that happened earlier this month, while discourse about left-wing cancel culture was roiling all over the internet. Goldberg’s comment “Fuck every single cop,” in response to an ACLU post about protesters being taken by plainclothes officers in unmarked vans, was widely reported in right-wing outlets. It drew ire from the likes of Donald Trump Jr. and many members of Alabama’s legislature, with many calling on Auburn for Goldberg’s immediate termination. 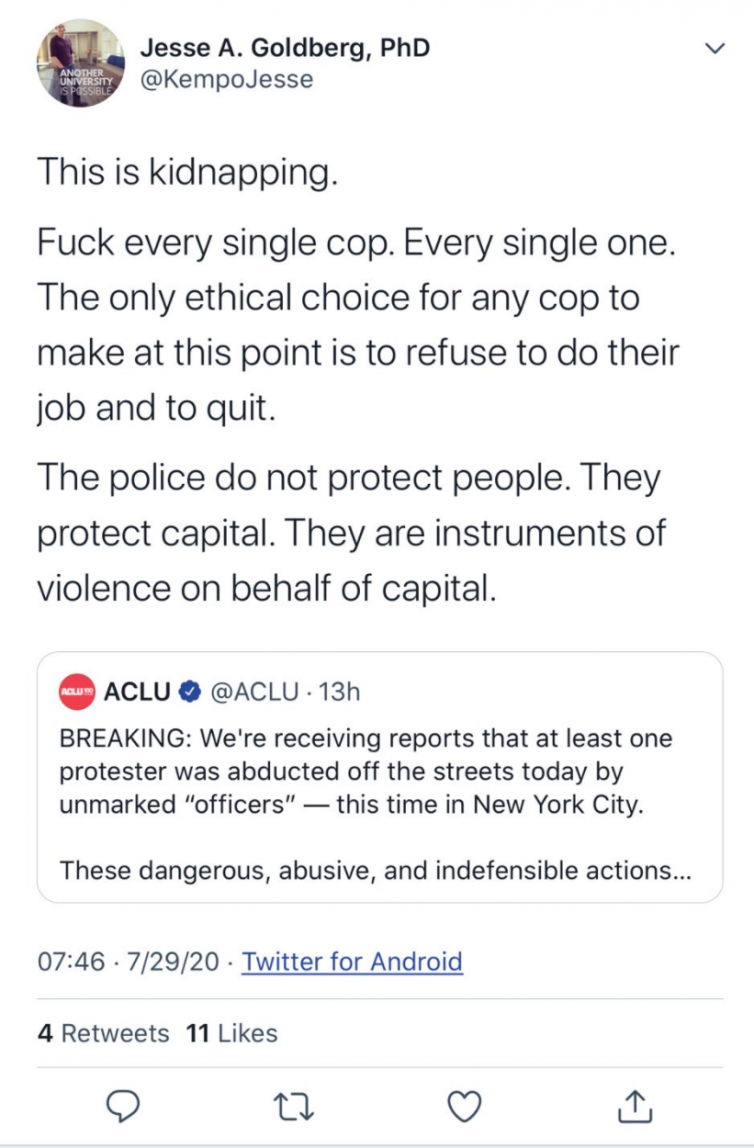 Auburn condemned Goldberg’s comments as “[h]ate speech” and said it was exploring “options” for how to deal with him. After a letter from FIRE reminding Auburn of their First Amendment obligations, Auburn confirmed it would not take adverse action against Goldberg. Nonetheless, Goldberg’s position was converted into a research-only fellowship by Auburn — a position Goldberg said he felt “safer” in after receiving many threats of violence.

It’s not only professors who are victims of censorship from the right, either. At Missouri’s Truman State University, a committee of students and staff members refused to recognize a student group, Animal Alliance, that promotes animal welfare and vegan lifestyles. The committee argued the prospective group presented an “emotional risk” to its members, who might encounter hostile responses to their philosophies, and that the group’s affiliation with People for the Ethical Treatment of Animals would hurt the school’s reputation.

Truman State is interesting in another way: It shows how the medicalization of censorship is developing in ways that might surprise you (unless you’re a First Amendment lawyer who works in this area). In COTAM, we noted that “the rationale for speech codes and speaker disinvitations was becoming medicalized,” with students claiming “certain kinds of speech… interfered with their ability to function.” Truman State went a step further, deciding that a group could not be formed because it intended to engage in speech that might invite responsive speech, and the responsive speech might interfere with the speaker’s ability to function.

Of course, many of the cases we see at FIRE do look precisely like the “left trying to censor the right” stereotype. For example: The University of Scranton’s administration stood by when its student government denied recognition to student group Turning Point USA on the basis of the group’s conservative views. Chapters of the conservative group Young Americans for Freedom were denied recognition at Syracuse University and Santa Clara University.

It bears repeating that many of the cases we see on campus involve students and professors who are themselves left-leaning or liberal, but who face pushback from the even further-left campus crowd. Examples include Bret Weinstein and Heather Heying at The Evergreen State College; Laurie Sheck at The New School; and Ronald Sullivan at Harvard. In the same vein was Tulane University’s outrageous disinvitation, following student backlash, of Edward Ball, the author of an anti-racist book about grappling with his ancestors’ history as slave owners and Klan members.

And then, of course, there is the “big middle,” in which professors or students get in trouble for largely apolitical reasons, like simply frustrating the campus PR department. Take, for example, a faculty librarian at Doane University who was punished for displaying photos of university students from the 1920s wearing blackface. (We will discuss those cases more in the “catching up” posts updating our “Bureaucracy of Safetyism” section.)

Next up in Catching up with “Coddling” Part 4: While it surely feels like we are more polarized, what does the data say?