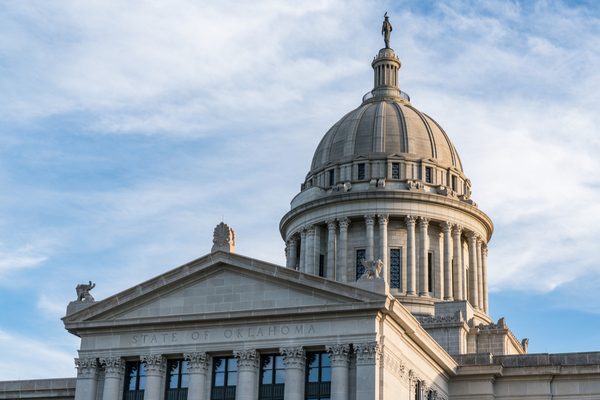 Yesterday, Oklahoma’s HB 1775 formally took effect, joining the growing number of states enacting legislation to ban, or crack down on, how issues of race and gender can be taught.

While the law primarily focuses on public K-12 institutions, its lack of precision invites pressure on college administrators from students, parents, and activists to broadly construe the statute to encompass discussion in higher education. That will cause a chilling effect, particularly when risk-averse administrators accept that invitation — which is exactly what happened at Oklahoma City Community College, offering a preview of the chill that may follow.

HB 1775 (now codified at Oklahoma Statutes Title 70, § 24-157) echoes recent proposals and laws in other states that ban a variety of teachings and required orientations concerning race. Oklahoma’s iteration bans any administrator or teacher in K-12 public schools from teaching or making “part of a course” certain disapproved “concepts,” including the notions that “one race or sex is inherently superior to another race or sex”; that “an individual, by virtue of his or her race or sex, is inherently racist, sexist or oppressive, whether consciously or unconsciously”; or that “any individual should feel discomfort, guilt, anguish or any other form of psychological distress on account of his or her race or sex.”

No enrolled student of an institution of higher education within The Oklahoma State System of Higher Education shall be required to engage in any form of mandatory gender or sexual diversity training or counseling; provided, voluntary counseling shall not be prohibited. Any orientation or requirement that presents any form of race or sex stereotyping or a bias on the basis of race or sex shall be prohibited.

Importantly, the law does not appear to have been intended to limit classroom discussions in higher education: While the law prohibits these concepts in “courses” in K-12 institutions, the section on universities and colleges does not include that language.

No statute can justify the violation of constitutional rights.

Instead, the law addresses mandatory trainings provided by the university’s administration — like those at the University of Oklahoma — for which no academic credit is awarded. But the law failed to define “training,” which could be readily interpreted to reach teaching. The problem is compounded by the fact that the law does not contain clear language explicitly cabining its prohibition of any “requirement that presents any form of race of sex stereotyping” (which is not defined) to make sure that it does not reach classroom instruction. This uncertainty, predictably, is causing a chilling effect as colleges struggle to interpret the law.

On May 18, Oklahoma City Community College administrators informed adjunct professor Melissa Smith that her summer class, “Race and Ethnicity in the United States,” which was fully enrolled, would be cancelled in light of the new law.

The course, according to the college’s website, was to “examine sociological theories of contact between minority and majority groups in a multicultural society, including topics such as prejudice, discrimination, acculturation, and pluralism.”

The administrative action may have been triggered by the college’s concern that it might be a prohibited “requirement” under the new law — USA Today reported that the course was “a general education requirement in social sciences” — inviting scrutiny over whether the class content presented “any form of race or sex stereotyping.” Under that reading, faculty could not “present” content that includes stereotyping, including presenting materials, information, or views in order to criticize or examine them.

Read about how @okc_aft member and adjunct professor Melissa Smith had her primary course shut down due to the recent passage of an Oklahoma law banning the teaching of critical race theory. https://t.co/dUBJr1AVDW

She added that she had not heard of a professor teaching students that one race was superior to another. “We teach that … one race and one sex have privileges and that there are, again, inequalities that we need to address,” she said.

College administrators told Smith that the course was being cancelled weeks before it was scheduled to start. The May 29 Washington Post report on the cancellation brought increased media attention to the situation, and the college clarified that the course was not cancelled but merely “paused.”

“[After] learning more about HB/SB 1775 and how it essentially revokes any ability to teach critical race theory, including discussions of white privilege, from required courses in Oklahoma,” a spokesperson for the college wrote in an email to The Washington Post, “we recognized that HB/SB 1775 would require substantial changes to the curriculum for this class particularly.”

At stake was more than just a college course: the cancellation of the class resulted in significant financial hardship for Smith.

“This was a huge chunk of my income,” she told KOCO 5 News.

FIRE joined the fray with a letter on June 2, pointing out that the language of the law did not support the college’s action, writing:

While HB 1775 banned the teaching of disapproved “concepts” in a “school district, charter school or virtual charter school,” those provisions do not purport to apply to institutions of higher education. The separate section applicable to “institution[s] of higher education within The Oklahoma State System of Higher Education” is intended to prevent mandatory trainings required as a condition of enrolling in classes, not to regulate college course content. In drafting legislation intended to bar K-12 teachers from making certain viewpoints “part of a course,” Oklahoma’s legislature demonstrated that it knew how to describe classes, and chose not to impose the same obligations on institutions of higher education.

Two days later, the college backed down, pledging that the course “will run exactly as it has in previous terms” with “no alterations to course content.” It also pledged to Smith that if the course couldn’t run because of lack of enrollment, she would still be paid.

To its credit, OCCC appears to have taken meaningful and thoughtful steps to mitigate the chilling effect caused by its overcautious step. One reported change, however, was that the course is now an elective, instead of a general education requirement in social sciences, according to USA Today. Smith told USA Today that she was dismayed that the course was no longer a requirement.

More disappointingly, however, is that the once-full course now has only one student.

While the college pointed to the passage of HB 1775 as its rationale for cancelling the class, documents obtained by FIRE through an Oklahoma Open Records Act request reveal that a parent’s complaint about the course’s content dealing with issues of race preceded the college’s decision to cancel the course. Additionally, college administrators raised concerns over “a higher-than-usual number of concerns in the past few weeks about how sociology courses are handling the topic of race.” One such concern came from a student’s feedback about another sociology professor who required students to watch a video on the history of redlining and its impact on black homeownership and wealth.

College administrators, meanwhile, have an obligation to defend the academic freedom and expressive rights of faculty and students. If a law suggests they censor, they must read it as narrowly as possible. If it still requires that they violate the First Amendment, they must challenge that law.

On May 18, the chair of the Department of Sociology sent Smith an email informing her that the class had been cancelled.

“I’m sorry to say that we’ve decided to cancel the section of Race and Ethnicity that was scheduled to run this summer. While it was fully enrolled, this course specifically is facing challenges (and specific complaints) in light of the new HB 1775 law,” the chair wrote to Smith. “Senior leadership at OCCC wants more time to discuss whether and how this will impact our curriculum for this course.”

On June 4, administrators notified Smith that the course could be taught and that “no alterations have been made to course content.” Smith wrote back thanking the administrators but noted that only one student enrolled in the course because it was scheduled to begin in “two days.”

OCCC’s correction was simply too little, too late.

Half a cheer for academic freedom

While the college’s about-face is commendable in its form — reinstating the class, reassuring that no changes would be made to its content, and reassuring the professor that she would be paid even if it turned out the class had to be dropped — it serves as a warning for legislatures and colleges alike.

Adopting laws that apply to speech in higher education without precise and clear drafting will have chilling effects, even if lawmakers are given the benefit of the doubt that the chilling effect is unintended.

Adopting laws that apply to speech in higher education without precise and clear drafting will have chilling effects, even if lawmakers are given the benefit of the doubt that the chilling effect is unintended. That’s because unclear laws will be read broadly by students, parents, activists, administrators, leading to calls for (and the initiation of) investigations or restrictions on discussions in order to stay far from the law’s ambit. Faculty, too, will read the laws broadly, rationally deciding that it’s better to avoid difficult subjects than to risk their livelihood.

College administrators, meanwhile, have an obligation to defend the academic freedom and expressive rights of faculty and students. If a law suggests they censor, they must read it as narrowly as possible. If it still requires that they violate the First Amendment, they must challenge that law. (Faculty facing censorship should contact FIRE immediately.) No statute can justify the violation of constitutional rights.

A class that was fully enrolled prior to the cancellation now has just one student enrolled after the college re-authorized the class just two days before it was scheduled to begin. That’s clear evidence of a meaningful chilling effect and a stark example of how imperfect legislative action coupled with overzealous college bureaucracy can chill student and professor involvement with difficult and complex issues.

Smith’s quotes to The Washington Post about making her students “comfortable being uncomfortable” reflect an admirable goal and one worthy of protection. FIRE has said for years that students who make it through college without once having their deepest beliefs challenged should ask for their money back. As Justice William Brennan wrote in the landmark 1967 Supreme Court case Keyishian v. Board of Regents, “Our Nation is deeply committed to safeguarding academic freedom, which is of transcendent value to all of us and not merely to the teachers concerned.” Lawmakers and administrators would do well to honor that commitment.