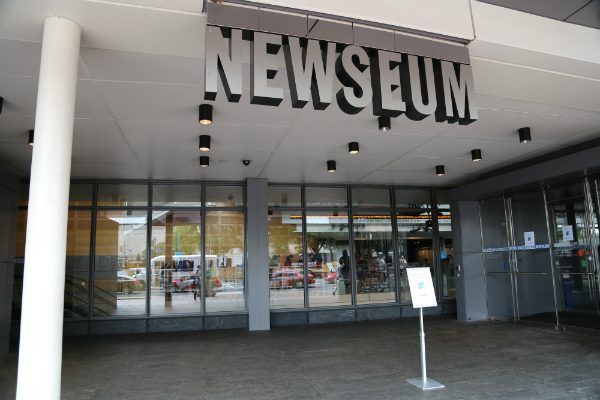 The Newseum, where I worked as part of its First Amendment Center, will close at the end of 2019. In honor of the Newseum, I asked two of my colleagues, Paul Sparrow and Paul McMasters, to write a few words about the Newseum and its history.

Paul McMasters was the Freedom Forum’s National First Amendment Ombudsman before his retirement. At the Freedom Forum, he was a vice president and executive director for the First Amendment Center at Vanderbilt University. Before joining the Freedom Forum in 1992, he was an editor at USA Today and served as the National President of the Society of Professional Journalists and on the boards of a number of press and freedom of information groups, speaking, writing, and testifying before Congress about press, speech, and FOI issues.

When the Newseum moved into its gleaming new home a stone’s throw from the nation’s capital, it was justly celebrated as a monument to democracy’s essential freedoms contained in the 45 words of the First Amendment etched into the seven-story tablet on the building’s face. A decade later, the Newseum went on the auction block, leaving the institution’s popular exhibits, interactive features, stores of artifacts, and educational outreach with an uncertain future. 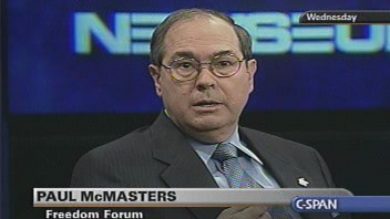 Paul McMasters (Credit: C-Span)
What is certain, however, is that freedom of speech, press, religion, assembly, and petition would be even more cruelly vulnerable should the Newseum be unable to find a new home by the end of this year. Given the Newseum’s brief history of financial turmoil, that is not beyond contemplation. The Freedom Forum, which has been the principal source of funding for the Newseum, invested a reported $600 million from the time the Newseum was conceived until it opened in 2008. This January, it sold for $372.5 million.

Loss or diminishment of the Newseum would be one more in a series of similar mission contractions for the Freedom Forum, whose once-ample endowment helped make it one of the nation’s foremost champions of First Amendment freedoms.

Continuance of that mission is crucial, of course, given the significant challenges the First Amendment faces in these times.

As it transitioned from the Gannett Foundation, which focused on small grants to communities where the newspaper chain’s properties were located, the Freedom Forum earned a reputation as a reliable and effective advocate for First Amendment freedoms, especially for the press. In the early ‘90s, it began to exert an oversized impact on First Amendment education and defense. At one time, it boasted an oversized footprint with its operations and centers stretching from coast to coast and across two oceans. 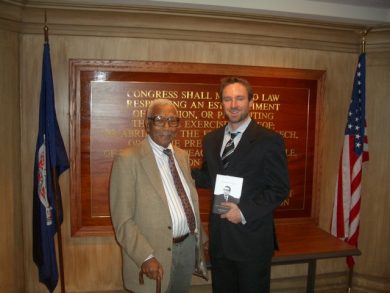 Judge Robert L. Carter & Sam Chaltain of the First Amendment Center (credit: R. Collins)
From the outset, the foundation was committed to producing and recognizing excellence in journalism; training journalists; conducting research, polls, and surveys; publishing books, reports, and studies on the press and related disciplines; educating the public about the role of the press in democracy’s vitality; defending the press in a wide variety of venues; and as a convener of disparate groups and individuals with First Amendment and press luminaries from over the world.

This formidable operation began to shrink and reshape its mission, however, as the idea of a museum dedicated to the press coalesced and eventually grew into a remarkably successful first iteration at the Rosslyn, Virginia, headquarters. That inspired the much more ambitious Newseum on Pennsylvania Avenue.

That first Newseum was shuttered eventually, of course, and the Freedom Forum itself left its impressive, some would say opulent, headquarters in Rosslyn and moved to the Pennsylvania Avenue building.

In the years before that, the foundation had shut down the Media Studies Center in New York City and the Pacific Coast Center in San Francisco, and dismantled its international programs. All of these operations had enjoyed a stellar reputation.

From 1991 through 2012, the First Amendment Center produced a remarkable array of programs and initiatives. Among them: 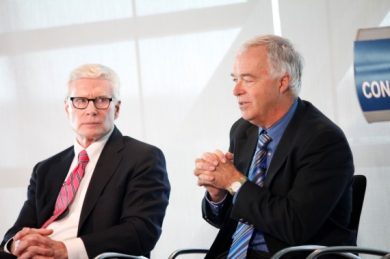 Charles Haynes, the Newseum Institute’s Religious Freedom Center director, left, and Ken Paulson, First Amendment Center president (credit: Kate Winkle/SHFWire Intern)
Fortunately, some of these programs were folded into the First Amendment Center operations under the Freedom Forum Institute, and a number of new programs, events, and other offerings have been added since then.

At its peak, there has been nothing comparable to the First Amendment Center’s outreach and influence, before or since.

If the Newseum, as promised by its parent foundation, reappears, its former impact, reach, and stature most likely will be in much-diminished form. If it doesn’t survive, however, that loss would cut deeply, particularly at a moment when threats and challenges to the First Amendment are myriad and mounting.

This month, Reporters Without Borders announced that the United States had sunk to its lowest ranking ever in protections for journalists — from a “satisfactory” place to practice their profession to a “problematic” one. The World Press Freedom Index now ranks the U.S. at 48th in a field of 180, three steps below last year’s rankings. No doubt, contributing to that drop were the physical attacks on 10 journalists this year, 46 since 2017, and the five who were killed in the Capital Gazette newsroom in Annapolis, Maryland, last June.

The current political and legal environment is proving especially vexing for U.S. journalists. Threats come from political leaders from the state house to the White House. They promise restrictions and retaliation for perceived “fake news” and reporting that they don’t like. As Robert Corn-Revere has pointed out in recent essays, the press has seldom been popular with U.S. presidents. But political attacks on the press of late have been far too pointed, if not incendiary. 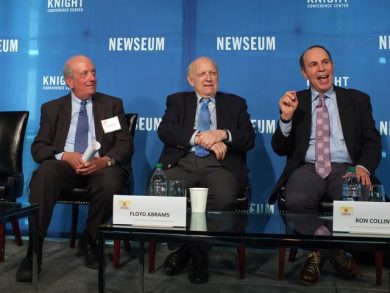 Tony Mauro, Floyd Abrams and Ron Collins (credit: R. Collins)
There is an unsettling echo of Nixon’s “enemies list” in President Trump’s oft-repeated comments about the press as the “enemy of the people” that creates such an environment. The presidential attacks are constant, ubiquitous, and ominous. He has said he wants to change the libel laws, he has threatened to revoke broadcasting licenses, and has attempted to block journalists or their employers from White House access.

In this atmosphere, even Justice Clarence Thomas has questioned the Supreme Court’s landmark ruling in New York Times v. Sullivan, termed “the single most important First Amendment case ever decided” by noted First Amendment attorney Floyd Abrams. The 1964 ruling protects journalists’ ability to report about public and political figures without being sued into silence.

A Georgia state legislator has even called for promoting a government-approved  “Canon of Ethics for Journalists.”

Exacerbating the plight of the press are the economic, technological, and social challenges that further compromise the ability of the press to consistently, fully, and without fear produce the quality of journalism that is the lifeblood of a healthy democracy. Local news is shrinking, newspapers are closing, and people are attaching themselves more and more to non-news sources for their information. 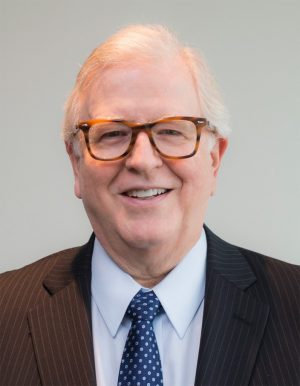 Against this backdrop, any further contraction of staff and operations or the constriction of financial resources for the Freedom Forum or Newseum present a sobering concern for the next version of the Freedom Forum and the Newseum.

There is little doubt that the First Amendment freedoms are in dire straits. There is little hope that there will arise a new champion with the force, the passion, or the record of these two institutions.

The crucial question is whether their leaders will have the will and the resources (and a dollop of good fortune) to continue their role as one of the unquestioned champions of our most fundamental rights and liberties.

Newseum June 15, 2016 mock Supreme Court event, Pear v. United States (credit: R. Collins)
Editor’s Note: Years ago, Paul McMasters successfully pushed for an online First Amendment Library, which I oversaw. Years later, when the Newseum discontinued the library and removed it from its website, Paul Sparrow kindly helped to retrieve some of the data, which was later used by the Foundation for Individual Rights in Education to relaunch and expand the First Amendment Library.