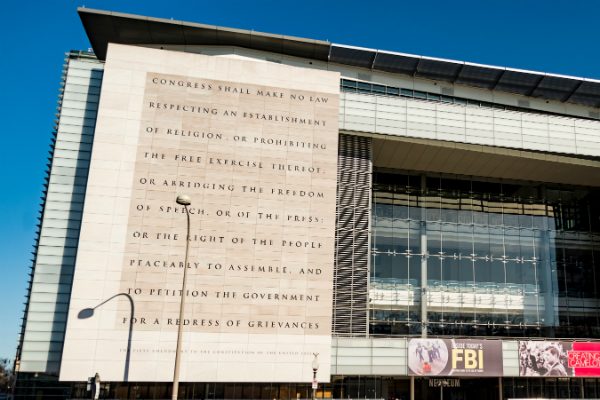 You have probably read that the Federal Trade Commission is holding hearings about the future of struggling news organizations. It makes me nervous to think of the government “helping” newspapers, particularly since I work in a building that has a 74-foot-high marble sign on Pennsylvania Avenue with the 45 words of the First Amendment.

It is a 74-foot-tall, 50-ton marble tablet. It is a proud icon of the First Amendment’s five freedoms. Since April 11, 2008, the Newseum’s four-story stone tablet, with the words of the First Amendment etched on it, has faced Pennsylvania Avenue. But that pride will end sometime after December 31 as Johns Hopkins University takes possession of the property located at 555 Pennsylvania Avenue, NW in Washington, D.C.

“When the $372.5 million purchase was announced, Newseum officials said the exterior stone tablet was not included in the deal,” according to the Washington Post.

When asked about the future of the iconic tablet, the Newseum’s vice president of marketing and public relations, Jonathan Thompson, replied: “At this point we don’t know exactly when that will be or where it will be stored once it’s off the building.” As reported by the Washington Post: “The Freedom Forum is seeking temporary office space in downtown Washington for the museum to use for the first half of next year.”

HBO seems to think so, at least when it comes to the dispute between the Michael Jackson Estate and HBO over the sex abuse documentary Leaving Neverland.

As recounted in the Hollywood Reporter: “A California federal judge is inclined to send to arbitration the dispute between the Michael Jackson Estate and HBO over the sex abuse documentary Leaving Neverland, but there’s one thing that’s holding him back. In an order following a hearing earlier this week, U.S. District Court Judge George H. Wu told the parties to deliver briefing on whether a bid to force HBO to arbitration violates the First Amendment.”

This from a First Amendment Encyclopedia article by David Hudson, Jr.:

A New York City rule prohibiting advertisements inside for-hire vehicles (FHVs) does not violate the First Amendment, a federal appeals court has ruled. Vugo, Inc., a Minnesota-based business which wants to sell an advertising software platform for Uber and Lyft, challenged the rule as a violation of its free-speech rights. The city’s Taxi and Limousine Commission (TLC) instituted the ban two decades ago after hearing many passengers complain about video advertisements in taxis. The TLC instituted the ban for both taxicabs and FHVs, like Uber and Lyft. The rules prohibited both exterior and interior ads unless they were specifically approved by the TLC. . . .

Vugo sued the city in October 2015, alleging First Amendment claims. A federal district court struck down the ban, reasoning that the city violated the First Amendment by banning such ads but permitting ads associated with Taxi TV. The district court ruled that there were less speech-restrictive alternatives that the city could have implemented to ensure passenger comfort without a blanket ban on advertising. . . .

Drivers for companies like Uber and Lyft in New York City can be banned from displaying advertisements in their vehicles, a federal appeals court said Tuesday. The 2nd U.S. Circuit Court of Appeals said the ban does not violate the First Amendment as it reversed a February 2018 lower-court decision that concluded the city could not justify its regulations.

The appeals panel sided with the city, citing its interest in protecting citizens “from the offensive sight and sounds of advertisements — not their content — while they are traveling through the city by car.”

“This is as true in publicly regulated transportation as it is anywhere else in the city,” according to the ruling written by 2nd Circuit Chief Judge Robert A. Katzmann. 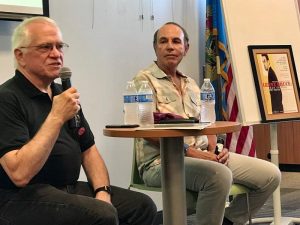 Corn-Revere & Collins (credit: Dennis Forney)
This from a story by Dennis Forney writing in the Cape Gazette in Lewes, DE:

Nationally prominent First Amendment lawyer Robert Corn-Revere drew a crowd of about 60 to Lewes Public Library July 13. His presentation was part of the Taking a Stand summer lecture series cohosted by the library and Topical Seminars.

Corn-Revere is best known for successfully petitioning New York Gov. George Pataki for a posthumous pardon of comedian Lenny Bruce in 2003. The speaker discussed the process of seeking that very first posthumous pardon in New York state along with a number of other issues related to the First Amendment to our nation’s Constitution, which protects freedom of speech.

Ron Collins, a law professor, resident of Lewes and one of the founders of the Lewes History Book Festival, co-authored a book with David Skover about Bruce and his conviction in 1964 on obscenity charges related to his use of more than 100 obscene words during a performance in New York City’s Greenwich Village. The law on which the conviction was based was eventually thrown out, but Bruce died before that conviction could be overturned. . . .

Corn-Revere said when Bruce was convicted, obscenity laws in the U.S. were in a state of flux. “Bruce was caught in the middle. Up until 1957, this country’s obscenity laws were based on the Victorian England approach which ruled that speech or statements could be labeled obscene if they would corrupt a person susceptible to hearing them. But then a revolution took place in First Amendment law starting in the 1960s. Prosecution for books went away and prosecution for comedy acts went away. Obscenity is not protected by our Constitution, but the government has a heavy burden of proof to prove that it isn’t protected. We are a free society, and speech will be protected.” 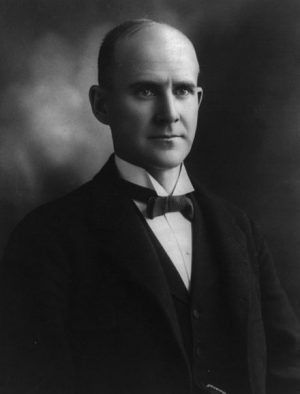 While preparing for an adult-ed class on Justice Holmes, one I’ve been teaching in Lewes, DE., I came upon some fascinating discoveries re: Eugene Deb’s June 18, 1918 speech in Canto, Ohio. Turns out that YouTube has videos of various notables doing verbal reenactments of the speech. For example:

→ And get this: Turns out that a young Bernie Sanders had a lot to say about Eugene Debs in a 1979 documentary about him.

→ Such video links and more will be in the 2nd edition of my e-college text with Will Creeley, David Hudson and Jackie Farmer: First Things First: A Modern Coursebook on Free Speech Fundamentals (1st ed. out in Sept. for $3.00 on Amazon).