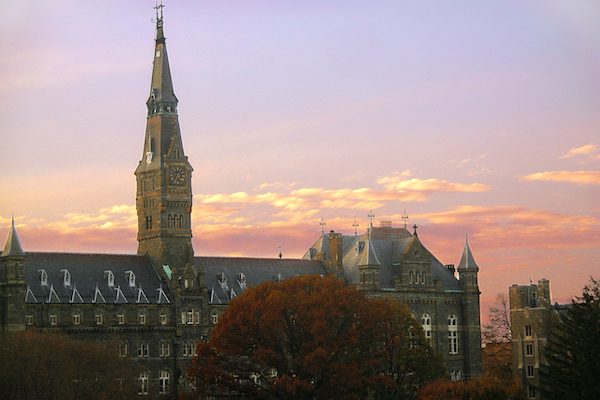 Georgetown University has a long and checkered history of violating its own robust promises of free speech and other rights. Whether it’s the perennially unrecognized “H*yas for Choice” student group (probably the best-known single-campus pro-choice group in America, thanks to Georgetown’s inadvertent efforts), incorrectly citing its tax-exempt status as a reason to prevent students from campaigning on campus (Georgetown students, interested in politics? Weird!), or, most recently, getting rid of two professors after they inadvertently recorded themselves talking about racial differences in grade distribution, Georgetown has made a lot of bad calls (and bad policies) when it comes to campus expression.

So perhaps it’s not surprising, though it is still strange and disappointing, that Georgetown seems to have stayed silent after making the right call in a situation where several other colleges recently have completely fallen down on the job. If, indeed, it made the right call, or any call at all. Which it… probably did? You be the judge.

In April, news broke that Michele Swers, a professor of American government, had voiced the word “nigger” in her U.S. Political Systems class. As the Georgetown Hoya student newspaper reported, on April 15,

Michele Swers, a professor of American government, read out the racial slur in her “U.S. Political Systems” class while quoting Clarence Brandenburg, a Ku Klux Klan leader. Swers did not censor the racial epithet when reading the quote off a PowerPoint slide presented to the class. The incident has since sparked a formal bias complaint to the university and a classwide letter from students to Swers.

As an initial point, it’s important to note that this was not just any quote from a Klan leader, though the reader could be forgiven for getting this impression from the Hoya article. While a quote from Swers later in the story reveals that this quote came from a U.S. Supreme Court decision, what is not mentioned (and which perhaps the article’s author did not really grasp) is that Brandenburg v. Ohio (1969) is actually a really important Supreme Court decision. It’s the case where the Court laid out the “imminent lawless action” test, which determined that speech loses its constitutional protection when it is 1.) directed at producing imminent lawless action and 2.) likely to produce such action.

So what did Georgetown do in the matter of Professor Swers? It appears that it did the right thing, but in the least helpful way possible.

Even if you are not a free speech nerd, if you are a news watcher at all, this may ring a bell. Here’s a hint about why: try Googling the phrase “Brandenburg Trump.” First among the 2,720,000(!) responses is this Washington Post story: “The landmark Klan free-speech case behind Trump’s impeachment defense.”

Is this case relevant and appropriate material for a U.S. Political Systems class, then? Most certainly. Swers did not use the epithet on a student. She did not endorse its use. She simply read it aloud in class, without censoring it, just as the Supreme Court wrote it. FIRE’s May 4 letter to Georgetown about the case explains what happened next:

When students sent messages in the Zoom chat box stating that they were uncomfortable with Swers’ use of the epithet, Swers explained that she is also “uncomfortable using that language,” but “feel[s] from an educational standpoint that I owe it to you all to try and lay out these issues.” After the class ended, Swers sent a Canvas message to her students notifying them that she had removed the epithet from her PowerPoint.

This did not satisfy some of her students. They quickly penned a letter to Swers, which was sent the next day, requesting that she “take action in the form of:

Request 1 was quickly fulfilled, with Swers emailing an apology to her class on April 18 and apologizing at the next class session as well. But the students’ letter was also accompanied by a “formal bias complaint to Georgetown’s Office of Institutional Diversity, Equity and Affirmative Action.” When a reporter for the Hoya asked if this meant that Professor Swers would be investigated, Georgetown replied that yes, she would.

All complaints filed with IDEAA are investigated fully, according to a university spokesperson.

“Following an IDEAA investigation, the university can hold known community members accountable for acts that violate our institutional policies through the imposition of sanctions and educational remedies if a policy violation is identified,” the spokesperson wrote in an email to The Hoya.

FIRE does not get involved when students simply complain to a university, even when that complaint asks, as this one did, that a fellow student or professor be censored. Students have the right to file such complaints, regardless of their merit. However, once the university launches an investigation, that changes things. As Georgetown told the Hoya, accountability through “sanctions and educational remedies” are on the table in such investigations.

And to be clear, the complaint in the students’ letter called, in a pretty comprehensive way, for a firm rule of explicit speech censorship to be established at Georgetown. From the letter:

This word was not only written on the slide without any censoring but also said aloud with a hard “r.” There should never be any reason for the N-word to be used in class… the N-word was repeatedly described as a merely “negative” addition to the class and defended with, “But I feel from an educational standpoint that I owe it to you all to try and… And layout these…these issues.”

The N-word was never acknowledged as blatantly racist or harmful to students. […]  Professor Swers, you did not take responsibility for your contribution to any harm students might have sustained in hearing you read the word aloud, nor did you commit to discontinuing your use of the word in future classes. Following this inadequate response, you continued the class without pause. […] By not making an active effort to apologize for or discredit the use of the N-word during your lecture, you accepted the use of the N-word as legitimate through your platform. [Emphases in original.]

People can and do have differing opinions on the appropriateness of presenting, uttering, or even simply assigning or referring to material containing racial slurs in class (all of this is assuming that it is pedagogically relevant). Some see a strong difference between the use and mention of the terms. Others prefer to use euphemisms or asterisks when racial slurs are present, though even this is no guarantee that students will not be offended. A respect for faculty free speech and academic freedom, however, requires that this determination be left up to individual faculty members.

More importantly, while students are free to demand it, the right to speak on any topic or to utter any word cannot be made dependent on the skin color of the speaker, or on the condition that the speaker be compelled to apologize for or condemn its use. This is an elementary and fundamental application of the principle of equal justice under law.

The uproar over the class and threatening talk of an investigation will surely chill speech and academic freedom for any other professors who might otherwise utter forbidden words or ideas.

Regardless of merit, however, Georgetown had said it would investigate the formal bias complaint. Universities often make this commitment, but there is a lot of leeway in the word “investigation.” Indeed, in some instances, like the repeated Title IX inquisitions to which Professor Laura Kipnis was subjected at Northwestern University, the disruptive, frightening, and often flatly unfair process is itself a punishment. And, as Stanford University recently found out in an intensely public and embarrassing way, unless there is some early process to dismiss claims that are meritless on their face, the “investigation” can end up hurting not just the targeted student but the university’s reputation.

So what did Georgetown do in the matter of Professor Swers? It appears that it did the right thing, but in the least helpful way possible.

FIRE wrote to Georgetown President John J. DeGioia on May 4, informing him of the issue, outlining the academic freedom concerns and asking for a response the following week. We have yet to receive one, despite an entire month having passed. However, thankfully, we also sent a copy of the letter to Professor Swers’ department chair, Professor Anthony Arend, who was more responsive. He wrote back to FIRE the very same day, saying, “I can assure you that I have not been notified of any investigation of Professor Swers and, as Department Chair, I would be notified in the event of an investigation.  As our policies make clear, Georgetown respects and supports the academic freedom rights of our faculty.”

So how does one reconcile Georgetown’s statement that “all complaints filed with IDEAA are investigated fully” with Professor Arend’s statement assuring us that no investigation was taking place? There are several options, and none of them are what you would hope for from a major university.

First, Georgetown might not actually “investigate fully” all accusations. This would just mean the spokesperson was lying, or that Georgetown doesn’t really follow its own policies.

Second, Georgetown might not have started the investigation as of May 4. However, there has been no word of one since, and what would it have been waiting for? If true, one has to wonder if Georgetown is this cavalier about meritorious complaints of actual discrimination.

While students are free to demand it, the right to speak on any topic or to utter any word cannot be made dependent on the skin color of the speaker, or on the condition that the speaker be compelled to apologize for or condemn its use. This is an elementary and fundamental application of the principle of equal justice under law.

Third, it’s possible that Georgetown was at that time, and possibly still is, secretly investigating Professor Swers while leaving her department chair totally in the dark about it, despite giving him the impression that he would know about such investigations. That would be disgraceful on a number of levels.

What’s most likely, though, is option four: Georgetown received the complaint, realized that it could not punish Professor Swers because it did not allege any actual wrongdoing, and quietly closed the investigation without telling anyone, hoping it would go away. If this is so, it means Georgetown has managed to get as much mileage out of the negative effects to free speech and academic freedom from this incident as possible while secretly making the right choice. The uproar over the class and threatening talk of an investigation will surely chill speech and academic freedom for any other professors who might otherwise utter forbidden words or ideas, and all without actually punishing a professor in a way that will galvanize her academic freedom claims and perhaps provide her with legal claims as well.

Conversely, imagine the beneficial effects on the campus climate that could have resulted had Georgetown publicly and unapologetically declared that it would not punish Professor Swers and reiterated that her teaching was a protected exercise of academic freedom. Not only would it bolster a climate of real debate, dialogue, and academic inquiry among Georgetown faculty, the resulting discussion would have led to a great deal of education and thinking about the topic for everyone on campus.

If we at FIRE can figure this out, so could Georgetown. So the question remains: What did Georgetown actually do here, and why? The answer, whatever it proves to be, will tell us a lot about the climate of academic freedom at Georgetown — and about the motivations of its leadership.