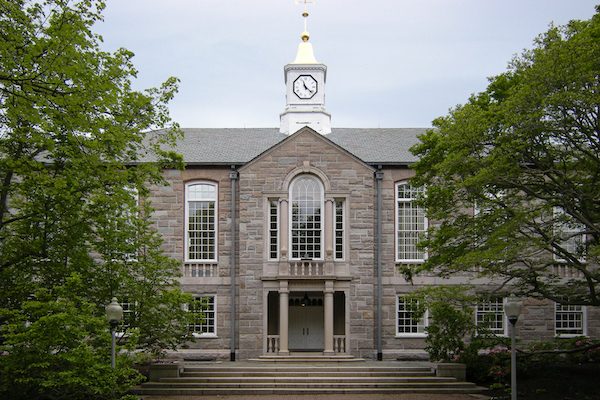 A professor is taking his former university to court, alleging that the administration retaliated against him for criticizing the university’s shortcomings on its diversity pledges.

The University of Rhode Island hired Louis Kwame Fosu in 2019 to teach in the school’s political science department. Among the courses Fosu taught was “Topics in Political Science: Examining Institutional Power, Checks & Balances, and Advocacy for a More Equitable Society.” He also co-founded “The Diversity Think Tank,” a non-profit that organized a “Diversity Partnership” that has been “joined and expanded by dedicated URI students” and aims to create “a permanent change of racial equity on campus by exposing and advocating to dismantle all aspects of inequitable, oppressive racist systems at the University of Rhode Island.” Fosu started this initiative in February 2020.

If faculty believe that criticism of the university on matters of public concern will be met with this kind of termination process, it will have a chilling effect on other faculty members who speak out.

Fosu has been highly critical of URI’s record on diversity. In late 2020, after a year rife with institutions debating systemic injustice, particularly in the wake of George Floyd’s murder, a report authored by Fosu and six of his students accused the university of “de facto Jim Crow racism.” The report accused the university of “deliberate and racist dehumanizing exclusion of highly qualified African-Americans/Blacks, Latinos/Hispanics and Native Americans from positions of senior leadership and other positions.”

The report named several administrators and accused the university of “gaslighting” students by paying lip-service to inclusivity and diversity while allowing a “racist and white supremacist worldview” to live “on in the indefensible and racist hiring practices of URI’s erudite all-white leadership.”

The report also criticized the school’s pledge that it is “deeply committed” to a diverse and inclusive academic community where everyone has “much to learn from one another.”

The report goes further to call for the removal of university leaders:

We as organized URI students, from all races represented in this historic document, see that now is the time for this change: African-American/Black, Latino/Hispanic, Native American, White/European and others, exercise our duty and constitutional right to petition our leaders and use our power, and to seek other powers—legal and legislative, to remove “corrupt, wantonly unresponsive, elitist and racist leadership at the University of Rhode Island for condoning and perpetuating institutional racism and normalizing dehumanizing racist inequities through their machinations of white supremacy.

In December 2020, the school responded to the report by calling the accusations “unwarranted, unsubstantiated, and defamatory personal attacks.” University officials also turned down a meeting with Fosu to discuss the report’s claims.

“The document includes numerous inaccurate statements as well as unwarranted, unsubstantiated, and defamatory personal attacks on several members of the URI community. Furthermore, the document also causes unwarranted damage to the good name and reputation of the University,” administrators wrote to Fosu. “We cannot in any way condone such overt attacks and your efforts to demonize members of our community with whom you may have disagreements.”

The administrators refused to meet with Fosu after the issuance of the report, according to the complaint. The university then launched an investigation that resulted in his suspension and eventual firing, Fosu alleges. From the complaint:

Instead of meeting with the students and Professor Fosu to discuss URI’s practices, Defendants ignored and hid from the requests, attempting instead to shield themselves by silencing Plaintiff. URI smeared the contents of Professor Fosu’s advocacy work and without notice or reason, removed Professor Fosu’s classes from the course catalog and put him on administrative leave. URI then began an internal investigation to concoct a reason to pretextually terminate Professor Fosu for something other than suppression of his free speech and race discrimination. The investigation resulted in the issuance of a vague report that cites behaviors and actions that violated URI policies but does not attempt to link these policies to the alleged misconduct in any meaningful way. More importantly, the report explicitly sidesteps the constitutional rights and violations of federal law central to this lawsuit.

The complaint argues that URI “circled the wagons and took immediate actions to intimidate and punish Professor Fosu by placing him on administrative leave, cancelling all his classes and finally terminating his employment.”

Fosu is alleging that the university violated the Rhode Island Whistleblowers’ Protection Act by retaliating against him and terminating him after he spoke out strongly against the university’s diversity efforts. He is requesting reinstatement at URI under the statute.

While Fosu’s criticisms of the university are undoubtedly provocative, there is no question that after a year of debating the history of institutional racism, the issues Fosu has spoken out about are of public concern. And whatever URI may believe about the merits of Fosu’s report, it’s hard to imagine any justification for conducting an investigation and firing in the manner described in the complaint.

If faculty believe that criticism of the university on matters of public concern will be met with this kind of termination process, it will have a chilling effect on other faculty members who speak out, and will discourage students from offering their own criticisms out of fear of disciplinary reprisal. With outspoken professors coming under fire from multiple sides, now is the moment for universities to put in place and to follow procedures designed to protect, not chill, the speech of their students and faculty.