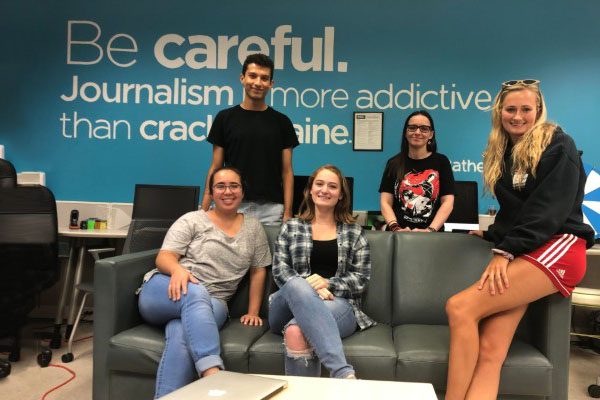 The editor-in-chief of a Florida student newspaper has a surprising message for whoever stole stacks of a recent issue with a controversial cover story:

Cameren Boatner, editor-in-chief of Florida Atlantic University’s newspaper, University Press, penned an op-ed for the paper yesterday detailing how she and a colleague discovered the latest issue stolen from racks across campus.

“The issue we put out was not portraying things in the most flattering light,” Boatner tells FIRE. “When that happens, issues tend to end up in the trash.”

“You don’t see a full stack of issues in the trash when people are happy.”

Someone trashed at least a bin full of copies of our latest issue with rape allegations against quarterback Chris Robison on the cover. But they didn’t just steal the papers. They also stole someone’s right to know what happens at their school.https://t.co/gqHq5lyCSe

“When we’re on campus we always check the trash bins,” Boatner said. “This was the first time that she actually found something. A full stack of our issues in the trash.”

“After that, she went around campus and found that most of our newsbins were actually empty. Then we went to the police.”

Boatner is now awaiting an update from police, who told her they are pulling area surveillance footage to try and find the perpetrator or perpetrators.

“I think the biggest frustration for us is that people perceive us as a free newspaper. And technically we are,” she said. “You can go into the bins and take out a paper.”

“It costs money and hard work.”

As Boatner notes in her op-ed, and as FIRE has routinely reported, you can steal a free paper.

And while newspaper theft remains a pernicious problem on campuses nationwide, Boatner’s op-ed highlights the foolishness of this kind of censorship — one would-be thieves should really consider: It routinely backfires.

“This drew more attention to the story than we could have ever gotten on our own,” Boatner said. “This is a particularly stupid form of censorship because in the end, all it does is help us.”

She also said the incident has cemented her confidence in her reporting skills.

“As a journalist, I found it kind of flattering,” Boatner said, noting the piece was compelling enough “for someone to not want people to read it.”

Boatner and her crew will be reporting on updates on the investigation over at University Press. And if you haven’t yet read the story the newspaper thief (or thieves) didn’t want you to see, it’s here.