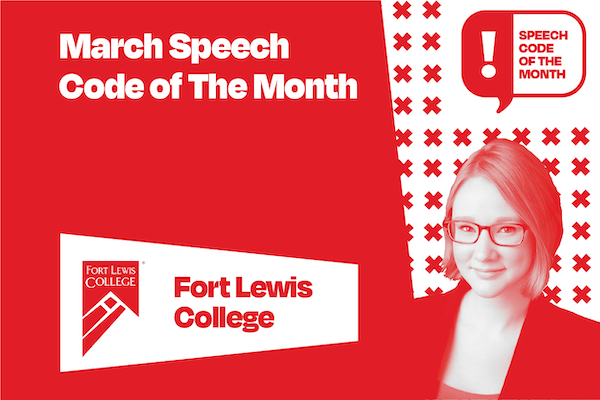 There is no blanket “hate speech” exception to the First Amendment. But Fort Lewis College, a public school in Colorado, maintains a policy that bans students from posting materials on campus that include “unprotected expressions” such as “hate speech.” The policy is inaccurate and misleading, earning its spot as FIRE’s Speech Code of the Month for March.

Fort Lewis’ Campus Posting policy states, “Regardless of the medium used, the following materials are not allowed for posting . . . Materials that contain unprotected expressions such as libel, obscenity, or hate speech.”

Libel and obscenity actually are two of the narrow categorical exceptions to First Amendment protection carved out by the Supreme Court, and have exacting legal standards. But “hate speech” doesn’t have a set definition, and while hateful speech could be included in expression that meets a categorical exception to the First Amendment, not all speech that could be seen as hateful necessarily meets those legal standards.

After all, a ban on hate speech could prohibit anything from a Black Lives Matter poster to a Blue Lives Matter message, depending on your views. (FIRE has seen both targeted by campus censorship demands.)

The policy may have a chilling effect on speech, as students will assume the policy will be applied to restrict anything an administrator applying the policy finds hateful.

The Supreme Court has made clear that the government can’t limit speech just because it’s subjectively hateful. For example, in Snyder v. Phelps, the Supreme Court upheld the overturning of a damages award against the Westboro Baptist Church for picketing with signs at a military funeral. Most people would find holding signs at a serviceman’s funeral with messages like “God hates you,” “Fag troops,” and “Thank God for dead soldiers” hateful, but the Supreme Court explained that our nation protects “even hurtful speech on public issues to ensure that we do not stifle public debate.”

By calling all hate speech “unprotected expressions,” and stating that materials that contain hate speech may not be posted on campus, Fort Lewis College does indeed risk stifling public debate.