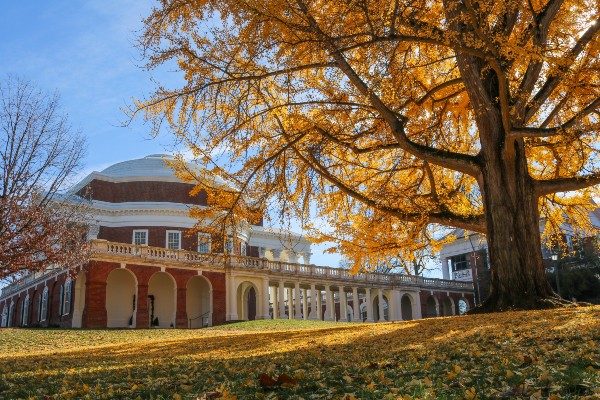 Last month, a University of Virginia student and resident of one of the university’s coveted residences on the Lawn decided to use the space on her door to say “FUCK UVA” and express critical views of the university. Although the student’s door sign elicited strong criticism from UVA alumni and staff alike, UVA President Jim Ryan responded by defending the student’s expressive rights, illustrating why UVA is one of the relatively few institutions in the country to earn FIRE’s highest, “green light” rating.

@UVA @UVAODOS @uvahousing
Door of 38 E. Lawn this morning. As Hoos we are better at starting conversations & effecting change. That cant start with ‘FU’, I encourage all on the lawn to express their voice, but remember you’re a public voice for all of us #Groundskeepers pic.twitter.com/eQCDSIXfeW

The student told local reporters she was prompted to express her criticisms of UVA after she broke her ankle and felt that administrators were not sufficiently responsive to her concerns about accessibility. She said she hoped to encourage the university to listen to its students.

On Sept. 20, President Ryan responded to the controversy and stated correctly, as FIRE has reminded colleges and universities time and time again: “The answer to speech that offends is more speech.” Ryan also explained:

The profanity on the sign is offensive and, in many ways, disheartening.  That said, as our legal counsel has confirmed, there is no doubt that the speech on the sign is protected by the First Amendment.  We allow students to post signs on their Lawn-room doors, and to remove this sign because of its content would run afoul of the Constitution and our own commitment to protecting free speech. The right to free speech in public spaces in this country is robust and protects speech that is profane, as well as speech that is offensive, even intentionally so.

President Ryan’s analysis is sound — the Lawn doors have traditionally been open for their residents to post signs and express themselves as they wish, and to punish students for the viewpoint or content of their expression in this context would run afoul of the First Amendment.

While at least one alumnus opined that President Ryan’s argument that UVA is constitutionally barred from censoring this student’s expression is “ridiculous” given its “fundamental duty to protect the aesthetics of the lawn,” it is anything but. As the U.S. Court of Appeals for the Ninth Circuit noted last year, students’ expressive rights in a limited public forum — in this case, their own residential doors — cannot be curtailed post-hoc in response to speech disfavored by the administration.

UVA’s general counsel also responded to critics in a letter to the Board of Visitors, explaining that “[t]he broad protections of the First Amendment do not yield to considerations of aesthetics or decorum.”

Further, as the Supreme Court noted long ago in Cohen v. California, “one man’s vulgarity is another man’s lyric.” While the UVA student’s sign includes profanity, the student’s choice of words does not render her speech unprotected, and UVA cannot — and should not — silence it.

While the UVA student’s sign includes profanity, the student’s choice of words does not render her speech unprotected.

On Friday, President Ryan addressed the UVA community again and indicated that next year the university may consider enacting restrictions on what students can post on the Lawn doors, stating: “Time, place, and manner restrictions would be legally permissible if they are narrowly tailored to protecting that environment, apply neutrally to all opinions and points of view, and preexist any particular controversy.”

Once again, President Ryan is correct — but to announce consideration of such restrictions in response to an active controversy does not instill confidence that, even if enacted at a much later date, restrictions are not a response to that controversy. FIRE encourages UVA to tread lightly in enacting restrictions on student expression, and we stand by to assist with any such policy or regulation to ensure its constitutional soundness.