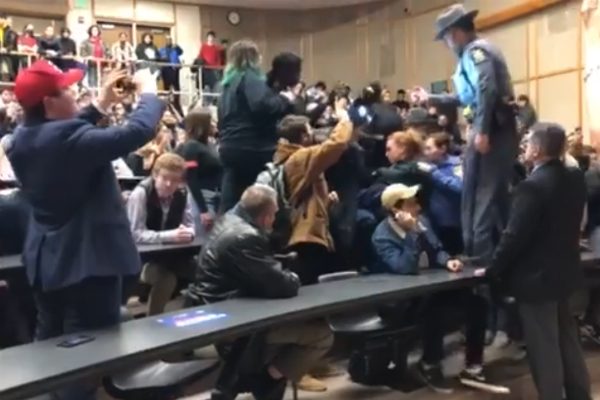 It happened again. This time, at New York’s Binghamton University.

A protester with a bullhorn hijacked a Nov. 18 lecture from economist Art Laffer, who was invited to speak by the BU College Republicans. The shoutdown, which happened just minutes after the event began, is the latest in a disturbing trend of protesters silencing others rather than debating them.

Binghamton prepped for controversy about as well as a university can — it provided an alternative space for protesters to exercise their own First Amendment rights, ensured police were on site to prevent violence, and asked attendees to save questions for after Laffer’s speech. Today, the university also issued a laudable statement acknowledging that “freedom of speech is fundamental to our core mission; academic inquiry and the exchange of ideas rest on the principle that all have a right to express their beliefs.”

On a campus still navigating the aftermath of last week’s violent confrontation between protesters and College Republicans, tensions were already high.

Authorities should not punish every instance of protest at a public speech — particularly quiet or fleeting protests. But where a time and space is reserved for a particular speaker, and protesters create a sustained disruption, colleges can and should step in. The First Amendment does not protect continuous protest intended to make it impossible for an event to continue. Protesters don’t have the right to silence a speaker’s event, and open discourse is not for sale to the loudest bidder.

In that sense, there is a sad irony in protesters chanting “Free speech!” as police attempted to allow the event to proceed. The biggest threat to free speech at Binghamton Monday evening wasn’t the police or Art Laffer — but the vigilante censors who decided they alone should dictate what others can say or hear.

Binghamton’s statement and footage of the event indicate the university took reasonable steps to prepare for and respond to the possibility of disruptive protest. However, the exact nature of what transpired between police and protesters at the event is unclear. Before the event prematurely ended, police arrested two protesters for refusing to allow the program to continue. In Bible Believers v. Wayne County (2015), the U.S. Court of Appeals for the Sixth Circuit decided that “police may limit speech in order to protect the speaker from a violent reaction, but only as a last resort.” When law enforcement officers intervene in response to hostile audiences, they must use the “least restrictive means for coping with a crowd’s hostile reaction” and cannot simply silence the speaker, lest they effectuate a heckler’s veto.

Robust debate and discourse is a foundation of what it means to attend college, and our whole mission as a civil liberties organization is to defend students’ exercise of that right. But the First Amendment right to peaceful protest doesn’t override someone else’s First Amendment right to speak (and to hear those they’ve invited to speak) in spaces they’ve reserved.

We encourage students who disagree with Laffer — or any speaker invited to any campus — to ask tough questions, protest in a way that doesn’t infringe upon others’ rights, and organize their own events. And if anyone tries to shout them down, we’ll be there.

It should take more than a bullhorn to override the First Amendment at Binghamton. FIRE encourages university leaders to use this situation to teach students about free speech. We will continue to monitor developments.