When the COVID pandemic engulfed the world in early 2020, Greg thought it would be a quiet year at FIRE, with nearly all colleges modifying operations to limit student contact, and only a fraction relying fully on in-person instruction.

It was indeed comparatively quiet — until the end of May, when the horrific video of George Floyd’s murder under the knee of a police officer outraged the world. We both hoped that the collective horror at Floyd’s treatment would result in some of the urgently needed cross-partisan criminal justice reform we advocated for in chapter 3. While there was some progress towards those goals, there was a gigantic rise in passions that also led to an intensification of the social dynamics we described in chapters 4 (rising intimidation) and 5 (witch hunts).

FIRE found that between 2015 and 2020, the annual number of incidents in which professors and other scholars were targeted for ideological reasons has increased from 28 to 120. Furthermore, the annual number of petitions against scholars has increased from five in 2015 to 84 in 2020. These disturbing trends are driven largely by undergraduates, who initiated half of the documented incidents since 2015, and almost two thirds of the incidents in 2020.[1] These examples include 251 tenured professors who were targeted and more than a dozen tenured professors who were fired, a result that was unimaginable even 10 years ago when tenure was thought to be nearly perfect employment protection.

A large number of cases now follow a pattern that was uncommon just a few years earlier: a group of people outright trying to get someone fired, expelled, or otherwise punished for their views. Some describe this practice as “cancel culture”; others dismiss that term and prefer “consequences culture” or “accountability culture.” Whatever you want to call it, attempts to punish, ostracize, fire, or otherwise “cancel” people in response to an alleged verbal or visual offense greatly increased in the summer of 2020. 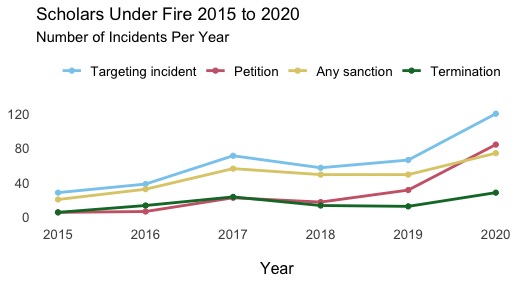 Figure 14.3. Number of four kinds of incidents identified by FIRE each year.

Elite universities were especially hard hit. The US News top 10 universities averaged about 7 attempts at each to get professors punished since 2015.[2] Stanford came in the worst with 20 attempts, although 11 of them arose from a single controversy. Of the top 100 US News universities, 65% had at least one attempt to get a professor punished and, when you factor in threats to speech like FIRE cases, restrictive speech codes, bias response teams, and successful disinvitations or shoutdowns, all but two colleges (California Institute of Technology and Colorado School of Mines) had a free speech/censorship incident since 2015. This means most graduates of top colleges in recent years have seen multiple examples of the consequences of saying the wrong thing — even when engaged in important intellectual practices like thought experimentation and devil’s advocacy — both on their campus and beyond, a terrible lesson from institutions that are supposed to inspire the bold and open-ended pursuit of truth.

Digging through old social media posts — a practice now known as “grievance archaeology” — became a frequent method for finding cancellation fodder. For example, more than 600 linguists signed an open letter calling for the removal of Harvard Professor Steven Pinker from the “distinguished fellows” of the Linguistic Society of America. The evidence against Pinker was two words in one of his 15 books, plus a handful of tweets, most of them years old, linking to published studies that contradicted the standard narrative about police violence. Pinker defended himself and his tweets, and his situation was a rare example of an institution (the LSA) standing up for the target of a cancellation attempt.

Pinker could stand up to such weak accusations in part because of his tenured status and prominence as a public intellectual. Other professors were not so lucky. Richard Taylor, an adjunct professor of history at St. John’s University in Queens, New York, was barred from teaching after students reported him to the university’s bias response team for hosting a discussion of the history of international and global trade. Topics discussed in his presentation included the role of potatoes in human progress, the opium and tobacco trades, and China’s burgeoning need for silver, as well as the international slave trade, which Taylor listed among a group of “Negatives to Globalization.” The last of his presentation’s 46 slides asked simply “Do the positives justify the negatives?” (you can see the entire very engaging slide show yourself following that link). Despite the wide-ranging nature of the discussion, which Taylor had taught without incident for several years, some students chose to interpret the question as asking them specifically to justify the international slave trade. Making matters worse, and prompting Taylor’s removal from the classroom, students posted photos of this slide to Instagram in a post denouncing Taylor (in all caps) as a “racist predator” and calling on St. John’s to punish him for his “heinous crime.” Taylor’s case is an example of a shift away from professors getting in trouble for outside speech, say on Twitter, and instead being targeted for asking the kind of difficult questions necessary to academic study.

Students were also targeted intensely in 2020, with at least a dozen schools revoking admissions offers to incoming students after the discovery of various things they said in private chats or on social media. Meanwhile, one of the clearest cases of the problem of universities acting as brand-protecting mega corporations (which we discussed in chapter 10) happened at the start of the pandemic when NYU Grossman School of Medicine and NYU Langone Health tried to demand that no staff members, including faculty doctors, speak to any member of the media about COVID “without explicit permission of the Office of Communications and Marketing,” lest they be “subject to disciplinary action.”

FIRE also completed the largest survey of student attitudes about freedom of speech on 160 campuses, involving over 37,000 students. They found that over four in five students (83%) report self-censoring their viewpoints at their colleges at least some of the time, with just over one in five (21%) saying they censor themselves often.

Many students are also supportive of sanctions and censorship of faculty and their peers. For instance in a 2021 survey of American college students: 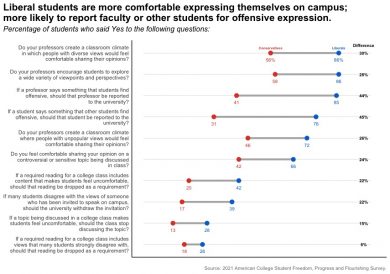 One reason why the moral explosions of 2020 were so intense was that a kind of monomania (unhealthy obsession with one thing) began to take over some portions of campus in the late 2010s. This monomania was a religious-like fixation on issues of power as a way to explain virtually all human relationships, civilizational and political dynamics, as well as even science. Power is of course sometimes relevant, but life is complicated and there are so many other factors at work, so many other human motivations in play. A good liberal arts education teaches students to use many lenses to analyze each problem, rather than training them to use a single lens to analyze every problem.

Author’s note: Jon & Greg would especially like to thank Sean Stevens and Komi German for the new research they have contributed to this article.

Next week: Part 4: The Polarization Spiral and the Great Awokening

[1] See German, K.T. & Stevens, S.T. (2021). Scholars under fire: The targeting of scholars for ideological reasons from 2015 to present. The Foundation for Individual Rights in Education. Available online: https://www.thefire.org/research/publications/miscellaneous-publications/scholars-under-fire/