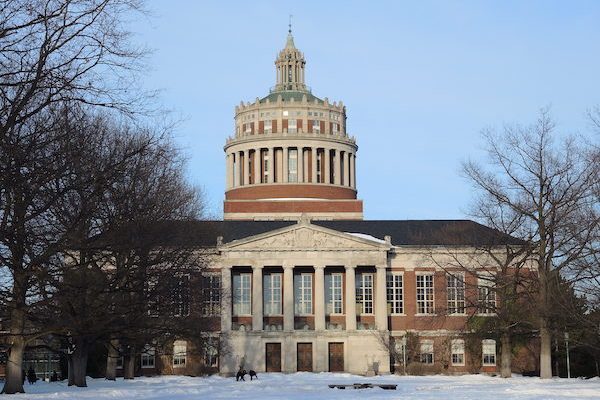 We’ve seen it time and time again: A professor assigns a relevant text containing racial epithets — whether it’s the work of an acclaimed African American author or a landmark Supreme Court decision — and quotes aloud from it verbatim. Outraged, offended students demand the university punish the professor. Some institutions defend their faculty members’ academic freedom to choose how to engage with difficult materials. Others acquiesce in short order.

This time it’s happening at the University of Rochester, where an English professor assigned a reading that included the word “nigger,” he read the word aloud, and a student complained to the administration. The professor is now suspended from teaching.

FIRE wrote to the university’s administration today — as we have done in similar cases at other institutions — urging the university to return the professor to the classroom and affirm its commitment to academic freedom.

While those at Rochester — including its administration, students, and faculty — have the expressive freedom to criticize Bleich, the university cannot promise academic and expressive freedom yet punish him for exercising that freedom.

David Bleich, an English professor at Rochester, was teaching a class called “Gender and Anger,” dedicated this semester to discussing how “women have collectively mobilized to announce and describe their anger to the public.” On Sept. 21, in preparation for reading a short story by African American author Ann Petry, which Bleich assigned to the class and which included the epithet “nigger,” he decided to read students an article by Harvard Law professor Randall Kennedy about whether it’s appropriate to use the epithet for pedagogical purposes. When reading Kennedy’s article to the class, he quoted the word “nigger” in Kennedy’s text, in order to distinguish it from the phrase “N-word,” which Kennedy also used six times in the article. A student complained to Rochester’s administration of Bleich’s quotation of the epithet on Sept. 23, and Bleich was suspended from teaching on Oct. 4. He was also provided with numerous restrictive conditions that he must meet before he will be permitted to resume teaching.

The Academic Freedom Alliance, a coalition of professors that, like FIRE, fights for faculty rights on campus, wrote to Rochester on Nov. 15, explaining that Bleich’s quotation of the epithet is protected by the university’s commitments that faculty enjoy academic freedom.

Kennedy, who wrote the article from which Bleich quoted, said Rochester’s discipline of Bleich is “profoundly disturbing” and that “compelled silence or bowdlerization is antithetical to the academic, intellectual, and artistic freedom essential to higher education.” Bleich is represented by Samantha Harris, a leading First Amendment attorney and a former FIRE attorney.

Today, FIRE joined these calls, criticizing Rochester’s suspension of Bleich. His punishment violates the university’s purported commitments to academic freedom, which grant faculty members substantial breathing room to determine how to approach subjects and materials relevant to their courses.

Because Bleich’s enunciation of the epithet is clearly protected by fundamental principles of academic freedom, removing Bleich from the classroom violated his academic freedom rights, which UR guarantees “in word and deed.” UR’s punishment of Bleich will have a chilling effect on faculty members’ willingness to confront challenging or difficult material.  This is an unacceptable result at an institution that makes clear commitments to protect its faculty’s academic freedom.

On Dec. 5, the Campus Times, Rochester’s student newspaper, published an article about the situation, which included comment from Gloria Culver, dean of Rochester’s School of Arts and Sciences. Culver said:

[T]he University and the deans in AS&E are firmly committed to the principle of academic freedom. This commitment is outlined in the University’s Faculty Handbook. We are equally committed to the principal pedagogic value — also reflected in the Faculty Handbook — of respecting the opinions and contributions of others, which is essential to a successful learning environment.

As we said in our letter, respect for the opinions and input of others is an aspirational goal, not an enforceable requirement. As the American Association of University Professors said in its amicus brief in McAdams v. Marquette University:

Views and opinions should be subject to debate, not to limitations based on claims that the expression of views infringes upon the rights of others. Adding such a component will only serve to limit the openness and breadth of the views expressed in academia, compromising essential rights of academic freedom.

The goal that faculty respect others’ opinions cannot impinge the pedagogical decisions of faculty themselves — here, Bleich’s decision to enunciate an epithet. Faculty can solicit, entertain, and reject student opinions and still respect those opinions.

Rochester is far from the first institution to punish a professor for his or her pedagogical choice to quote an epithet from relevant classroom materials:

A new low for the University of Illinois Chicago?

UIC is breaching a promise it made to Prof. Kilborn — and violating his academic freedom rights again — by REQUIRING he attend a diversity training before he can return to the classroom.https://t.co/QaCecGNq6Y @thisisUIC https://t.co/tpwYVWTj2K

Some faculty confronted by criticism for their pedagogical choice to vocalize the slur have chosen to discontinue doing so. Others believe, as one journalist put it, that students and professors should “aim for accuracy and clarity without ‘sugarcoating’,” as euphemisms might inhibit the ability to confront and interrogate history and literature.

Yet these are decisions best left to faculty, part of which may be considering criticism by students or colleagues, rather than subjecting faculty to administrative fiat or proscriptions against particular words. Emory Law professor Kamina Pinder, who says she quotes the word “nigger” during class while reading “Letter from Birmingham Jail,” said of controversies at Emory:

FIRE has long argued that the solution to speech that some find offensive is more speech. As we said in our letter to Rochester:

In situations such as this, where students, other faculty, administrators, or the broader community disagree with a faculty member’s pedagogical choices to teach offensive material, there is a simple solution—more speech, the remedy for offensive expression that the First Amendment prefers to censorship. Faculty are not shielded from all consequences of their choices: Criticism is a form of more speech.

While those at Rochester — including its administration, students, and faculty — have the expressive freedom to criticize Bleich, the university cannot promise academic and expressive freedom yet punish him for exercising that freedom. As such, FIRE calls on Rochester to return Bleich to the classroom and drop all sanctions against him.