Since the January 2020 New York Times exposé on Clearview AI’s (“Clearview”) data gathering and use practices, there have been nine class action cases filed against the company and several related parties. These cases have been raised in several different jurisdictions, and allege violations of a variety of laws. . . .To put it mildly, the details of these alleged practices were not well received when published by the New York Times. 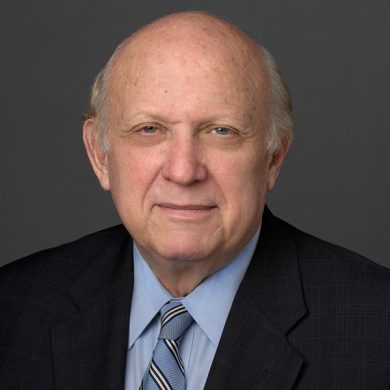 “Clearview AI has hired Floyd Abrams, a top lawyer, to help fight claims that selling its data to law enforcement agencies violates privacy laws. . . . Litigation against the start-up ‘has the potential of leading to a major decision about the interrelationship between privacy claims and First Amendment defenses in the 21st century,’ Mr. Abrams said in a phone interview. He said the underlying legal questions could one day reach the Supreme Court.”

So began a New York Times article by Kashmir Hill. Mr. Abrams recently told FAN that there “are ten cases in federal court, six in SDNY and four in the ND of Illinois. There is a case in the Vermont State Courts and one in the Illinois state courts by the ACLU.” (See below for the list of judicial rulings and legal complaints).

Most of the suits have been transferred to New York’s Southern District, under Judge Colleen McMahon. Mr. Abrams plans to file his notice to appear in those cases [soon].

Clearview AI is also represented by Tor Ekeland, a lawyer known for representing hackers, and Lee Wolosky of Jenner & Block. In addition to Mr. Abrams’s plans to assert a free-speech right to disseminate publicly available photos, the company plans to challenge the applicability of the Illinois law to a company based in New York.

A new technology: Its dangers and claims to constitutional protection

Clearview AI makes its business to identify people. It does so by collecting billions of photographs from the internet and storing them all in a special database. Once it does so, it offers the contents of that database to private companies, along with federal, state, and local law enforcement agencies; it sells its data to them. They then match their photos to those in the database to identify a person.

As Clearview presents itself:

Clearview AI’s technology has helped law enforcement track down hundreds of at-large criminals, including pedophiles, terrorists and sex traffickers. It is also used to help exonerate the innocent and identify the victims of crimes including child sex abuse and financial fraud.

Using Clearview AI, law enforcement is able to catch the most dangerous criminals, solve the toughest cold cases and make communities safer, especially the most vulnerable among us.

“The bottom line is that, if left unchecked, Clearview’s product is going to end privacy as we know it,” said Nathan Freed Wessler, a lawyer at the A.C.L.U., “and we’re taking the company to court to prevent that from happening.”

Google, YouTube and Twitter have sent cease-and-desist letters to Clearview, in an attempt to stop it from scraping photos on their services.

As Mr. Abrams told FAN, he believes that there is an important First Amendment value at issue here.

Clearview’s public photo search engine is no different for First Amendment purposes from Google’s. It matches information on the public Internet to specific user search queries by running algorithms on public data stored on networked private servers on the Internet. It is fully protected by the First Amendment in doing so.

Furthermore, as Abrams sees it, the:

First Amendment defense in the cases involving Clearview is straightforward. It has long been clear that as the Supreme Court put it in Sorrell v. IMS (2011) that “the creation and dissemination of information are speech within the meaning of the First Amendment.” That is what Clearview does and it is well-established that that principle applies as well to both computer language and search engine results, both of which are treated as speech protected by the First Amendment.

Finally, as he told the New York Times:

“I found it really interesting. Here we have 21st-century judges addressing 21st-century technology to see if they’re consistent with an 18th-century document.” . . . “That said,” he continued, “where there is a direct clash between privacy claims and well-established First Amendment norms, what would otherwise be appropriate manners of protecting privacy have to give way before the constitutional limitations imposed by the First Amendment.”

From the Institute for Free Speech’s job listing:

The Institute for Free Speech anticipates the need for a highly experienced attorney to direct our litigation and legal advocacy. President Trump announced plans to nominate our longtime Legal Director to the Federal Election Commission, in which case he likely would be confirmed in late summer or fall. 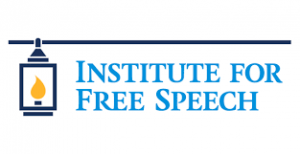 The Legal Director will direct our litigation and legal advocacy, lead our in-house legal team, and manage and expand our network of volunteer attorneys.

The Legal Director must have extensive litigation experience and a broad background in legal advocacy. Ideally, the Legal Director will have deep First Amendment or constitutional law expertise. Familiarity with campaign finance or lobbying law is a significant plus. The Legal Director will work with senior management to set organizational priorities. The position reports directly to our President.

As a senior legal position with a leading nonprofit organization, it requires substantial travel (post-pandemic, we estimate 10-20% for the DC-based Legal Director), significant working hours, and the ability to act autonomously.

A strong preference will be given to candidates who can work in our Washington, D.C. headquarters. However, we will consider exceptionally strong candidates living and working virtually from anywhere in the country. In addition to litigation-related or advocacy-related travel, a virtual candidate would be required to travel for regular week-long visits to IFS’s headquarters after the pandemic’s impact has receded. 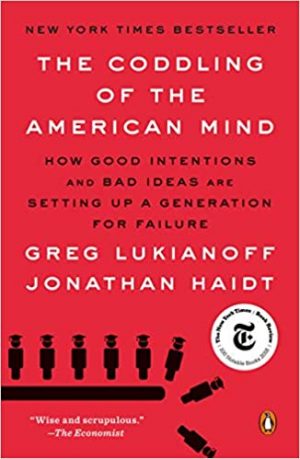 This is the third part of a multi-part series updating developments since the publication of “The Coddling of the American Mind: How Good Intentions and Bad Ideas are Setting up a Generation for Failure” (2018). See part one here and two here. (This month marks the fifth anniversary of the original COTAM article, and this week marks the second anniversary of the publication of COTAM, the book.)

Today we will be updating the examples in Chapter 6 of the book, where we demonstrate that censorship on campus does not always look like the left-versus-right stereotype, and that professors and students still sometimes land in trouble for saying things that anger those on the right side of the political spectrum. These examples are especially worth noting while the country is grappling with ideas of cancel culture, and when some would have you believe cancel culture only targets conservatives.

New book: Nossel on ‘Defending Free Speech For All’

A vital, necessary playbook for navigating and defending free speech today by the CEO of PEN America, Dare To Speak provides a pathway for promoting free expression while also cultivating a more inclusive public culture. 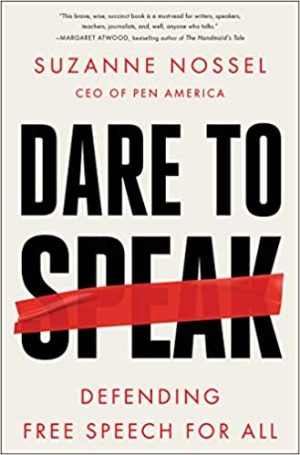 Online trolls and fascist chat groups. Controversies over campus lectures. Cancel culture versus censorship. The daily hazards and debates surrounding free speech dominate headlines and fuel social media storms. In an era where one tweet can launch—or end—your career, and where free speech is often invoked as a principle but rarely understood, learning to maneuver the fast-changing, treacherous landscape of public discourse has never been more urgent.

In Dare To Speak, Suzanne Nossel, a leading voice in support of free expression, delivers a vital, necessary guide to maintaining democratic debate that is open, free-wheeling but at the same time respectful of the rich diversity of backgrounds and opinions in a changing country. Centered on practical principles, Nossel’s primer equips readers with the tools needed to speak one’s mind in today’s diverse, digitized, and highly-divided society without resorting to curbs on free expression.

At a time when free speech is often pitted against other progressive axioms—namely diversity and equality—Dare To Speak presents a clear-eyed argument that the drive to create a more inclusive society need not, and must not, compromise robust protections for free speech. Nossel provides concrete guidance on how to reconcile these two sets of core values within universities, on social media, and in daily life. She advises readers how to:

Nossel warns against the increasingly fashionable embrace of expanded government and corporate controls over speech, warning that such strictures can reinforce the marginalization of lesser-heard voices. She argues that creating an open market of ideas demands aggressive steps to remedy exclusion and ensure equal participation.

From the episode description:

In this Special Edition, we will zoom in on current challenges to free speech – specifically in the US. With me to discuss this timely subject, I have  CEO of PEN America, Suzanne Nossel, who has just published her new book Dare to Speak: Defending Free Speech for All. 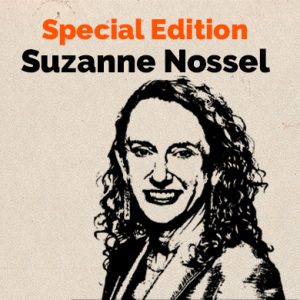 The conversation evolves the main conclusions of Suzanne’s book including matters such as:

Suzanne Nossel is the CEO of PEN America. She has also served as the Chief Operating Officer of Human Rights Watch and as Executive Director of Amnesty International USA, and held senior State Department positions in the Clinton and Obama administrations. 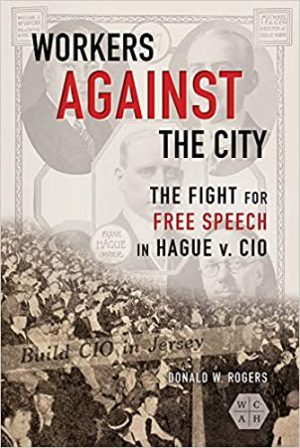 The 1939 Supreme Court decision Hague v. CIO was a constitutional milestone that strengthened the right of Americans, including labor organizers, to assemble and speak in public places. Donald W. Rogers eschews the prevailing view of the case as a morality play pitting Jersey City, New Jersey, political boss Frank Hague against the Committee for Industrial Organization (CIO) and allied civil libertarian groups. Instead, he draws on a wide range of archives and evidence to re-evaluate Hague v. CIO from the ground up.

Rogers’s review of the case from district court to the Supreme Court illuminates the trial proceedings and provides perspectives from both sides. As he shows, the economic, political, and legal restructuring of the 1930s refined constitutional rights as much as the court case did. The final decision also revealed that assembly and speech rights change according to how judges and lawmakers act within the circumstances of a given moment.

Clear-eyed and comprehensive, Workers against the City revises the view of a milestone case that continues to impact Americans’ constitutional rights today.

Latest So To Speak Podcast

On today’s episode of So to Speak: The Free Speech Podcast, we are joined by FIRE’s Robert Shibley and Samantha Harris to discuss a whirlwind summer: FIRE has fielded a record number of requests for help, and this week the Department of Education’s much-anticipated new Title IX regulations go into effect. There’s also “cancel culture.”