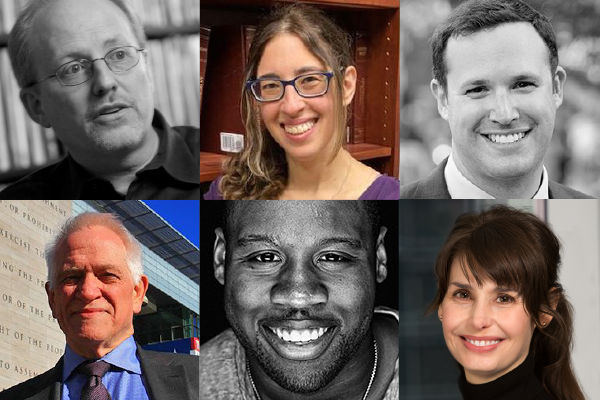 As the fight for free speech grows more critical than ever, FIRE continues to seek the guidance of leading experts on free expression and the First Amendment to help advance our mission of protecting individual rights.

Meet the newest members of our Board of Directors:

Samuel J. Abrams is a visiting scholar at the American Enterprise Institute, where he focuses on questions related to civic and political culture and American ideologies. He is also a professor of politics and social science at Sarah Lawrence College, as well as a faculty fellow with New York University’s Center for Advanced Social Science Research.

Kmele Foster is a partner at Freethink, a digital media company focused on the people and ideas changing our world. He is also a regular contributor to various national media programs and co-hosts a syndicated media commentary podcast, “The Fifth Column.”

Meet the newest members of our Advisory Council:

Robert Corn-Revere is a partner in the Washington, D.C., office of Davis Wright Tremaine LLP, specializing in freedom of expression and communications law. A leading First Amendment lawyer, Corn-Revere has written widely on First Amendment and communications law issues. His latest book, “The Mind of the Censor and the Eye of the Beholder,” shows how freedom of expression is essential to American identity.

Erica Goldberg is a professor at the University of Dayton School of Law whose scholarship focuses on tort law remedies and First Amendment rights. She began her scholarly career at FIRE, where she served as a Justice Robert H. Jackson Legal Fellow. Goldberg’s work has been published in various law reviews and links to her website, In A Crowded Theater, have been featured in The Washington Post and on CNN.

Timur Kuran is a professor of economics and political science at Duke University, where he serves as the Gorter Family Professor of Islamic Studies. Kuran directs the Association for Analytic Learning about Islam and Muslim Societies and co-edits the Journal of Comparative Economics. His forthcoming book, “Freedoms Delayed: The Political Legacy of Islamic Law in the Middle East,” explores the historical reasons why the Middle East is the world’s most repressive region.

Sallie James is director of development at the Cato Institute. Before joining Cato as a trade policy analyst in 2006, James was an executive officer in the Office of Trade Negotiations in the Australian Government’s Department of Foreign Affairs and Trade. Prior to that she was a Senior Policy Adviser in the Australian Government’s Department of Agriculture, Fisheries and Forestry. She also held numerous research and teaching positions.

Each of our new members’ unique personal and professional experience — spanning from academia to law to media — has led them to a deep appreciation for free speech and academic freedom, equipping them for success in their important roles at FIRE.

And what better place to become involved with issues of free expression than FIRE, where Advisory Council member Erica Goldberg’s academic journey began. “FIRE is how I started publishing, which allowed me to enter academia,” said the law professor and former Jackson Legal Fellow. “FIRE has also shaped the lens through which I see many of the issues plaguing academia.”

Erica “has dedicated her career to advancing the principles FIRE holds dear and is a role model for our country’s future lawyers,” said FIRE President and CEO Greg Lukianoff.

Politics and social science professor Sam Abrams also strongly identifies with FIRE, saying, “[B]eing part of FIRE is part of who I am.” He credits his Jewish upbringing for instilling in him a belief in the value of knowledge-seeking and open debate, informing his decision to become a professor and advocate for free expression:

Abrams’ belief in the illuminating potential of discourse makes him a natural fit for his role on FIRE’s Board of Directors. “Sam’s research into political culture on campus is documenting and quantifying the challenges to free expression there, creating opportunities for FIRE to address those challenges on a larger scale,” said Lukianoff.

Lukianoff speaks highly of all the new members of FIRE’s Advisory Council and Board of Directors, saying “I am thrilled to have each of these talented and committed people join the FIRE team.”

“I am thrilled to have each of these talented and committed people join the FIRE team.”

He notes the important contributions of each new member, including Board of Directors member Kmele Foster, whose “creative projects challenge his audiences to react to social conflict with individual courage instead of the collective fear that motivates censorship,” and Advisory Council member Timur Kuran, whose “research into preference falsification foreshadowed the current social dynamics on campus that make self-censorship so widespread.”

Of Advisory Council member Robert-Corn Revere, Lukianoff says, “Bob is not only one of the nation’s preeminent First Amendment litigators, but also a kind of First Amendment conscience, whether that’s working with Ron Collins to secure New York’s posthumous pardon of Lenny Bruce or reminding us all of America’s flirtation with Anthony Comstock’s Victorian obsessions.”

Corn-Revere has appeared frequently in FIRE media, from our “So to Speak” podcast to First Amendment News. Regarding his aspirations as a new member of FIRE’s Advisory Council, Corn-Revere said, “I hope to be able to contribute in some small way to FIRE’s principled and nonpartisan support for a culture of free expression.”

While FIRE’s new Advisory Council and Board members share an enthusiasm for First Amendment rights, they also recognize the grave challenges these rights face on campuses today — challenges that must be surmounted.

It is “a great danger to our nation” that colleges and universities are not fulfilling their supposed role as spaces for free discourse,” said Abrams.

Kuran agrees. In reference to the current campus climate, the professor of economics and political science says, “Faculty and students live in fear of offending someone’s sensibilities.

Despite contemporary academia’s less-than-stellar track-record on issues of free expression, FIRE’s nonpartisan defense of its mission and tireless work to protect student and faculty rights is a reason for optimism. In Kuran’s words:

FIRE seeks to reinstate expressive and intellectual freedoms that academia has lost. Its work gives hope that academia will rediscover and start reasserting the core values enshrined in the mission statement of almost every American university and college.

Indeed, FIRE will defend student and faculty rights as long as rights violations continue to occur. We are grateful to our new Board of Directors and Advisory Council members for helping equip us to face threats to free expression and academic freedom, and for helping us work toward a society in which these freedoms are widely understood, valued, and protected.