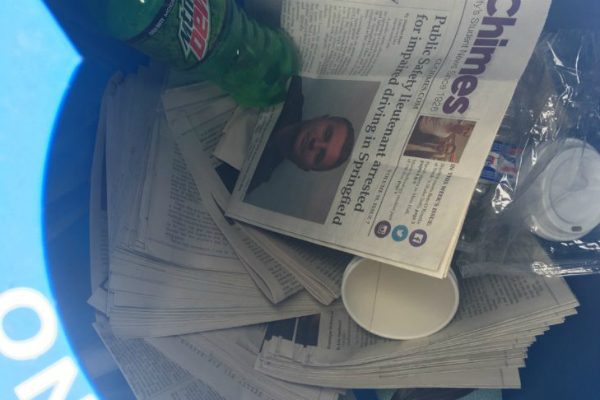 Heather Barr, editor of Capital University’s student newspaper The Chimes, was in class. But when she looked at her phone, she panicked.

It was a message from a fellow Chimes staffer, saying some campus newsstands were empty. That’s very unusual for The Chimes, which usually ends up recycling extra newspapers each week.

“I was stressed out during class trying to figure out what to do next,” Barr explained.

What she did next was rush around — checking every single rack on Capital’s Bexley, Ohio, campus. And what she found was highly concerning: Five of 11 newsstands were empty, totalling more than 700 missing papers. At three of those locations, Barr found stacks of newspapers in nearby trash or recycling cans.

“When I heard the newspapers were gone, I was upset obviously,” Barr said. “But when I went around and saw them in the trash, that was really difficult, especially knowing how much work goes into it.”

“It was like someone saying, ‘All your work is trash.’”

The stacks of newspapers in trash bins strongly suggested that the stands weren’t emptied because that week’s issue was unusually popular, but instead because of deliberate newspaper theft.

The top story that week was about Capital public safety officer Jamie Castro being arrested for impaired driving.

But because that story implicated a campus police officer, Barr and The Chimes staff were reluctant to report the theft to university police, Barr said. Instead, the staff tweeted and posted a story asking for those with information to come forward.

BREAKING: About 100 copies of the Chimes newspapers were found by staff members in trash bins around campus this afternoon.

DM us if you have any tips!https://t.co/aMb0bYVtlm

But public safety Chief Frank Fernandez, with whom Barr describes having a positive relationship, reached out to her soon after, asking her to make a report, which she did.

Footage showed George steal the papers from one newsstand, and showed him in the vicinity of another newsstand around the time the papers were taken. No surveillance was available to positively identify who hit the other three newsstands.

George was on duty when he stole the newspapers, an act that could constitute a misdemeanor in Ohio, though the paper declined to press charges. George was quickly dismissed from the police force.

FIRE has seen newspaper theft become an increasing problem for student media. In our recently published student press report, we included theft as one of seven warning signs of student newspaper censorship.

FIRE commends Chief Fernandez and Capital University for acting swiftly to ensure justice and make clear that it will not tolerate this censorial behavior. As Barr describes it, Fernandez acted as a true ally to the press in this situation.

But at many colleges and universities, student journalists don’t have it so lucky.

For example, when papers were stolen from newsstands at Radford University in September, campus police initially declined to investigate because, they said, stealing free newspapers is not a crime. (A claim that, by the way, is false.)

“Looking at other universities with similar problems, I wasn’t expecting to get more information,” Barr said of her hunt for the perpetrator. “But we also weren’t going to stop trying.”

FIRE has a variety of great resources for student journalists.

And if you find empty racks on your campus — or otherwise suspect newspaper theft —let FIRE know.