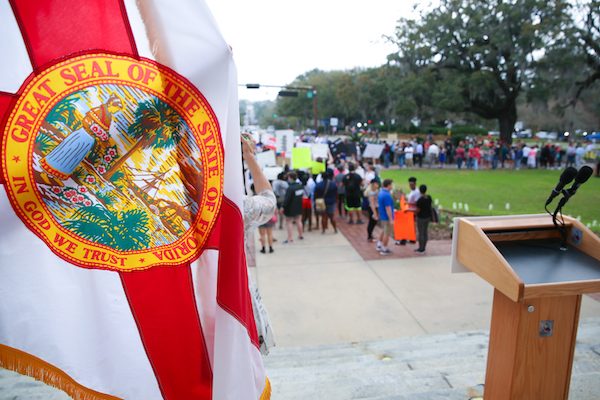 We have previously written about the wave of bills on race and sex stereotyping that have been introduced in state legislatures around the country. For the past two years, FIRE has been on the front lines opposing provisions that prohibit certain topics or ideas from being taught in college classrooms.

While many of these state bills touch on similar subjects, they differ in their provisions and even in their applicability to institutions of higher education. As many legislative sessions come to an end for 2022, this blog provides an update on some of the legislation we engaged with in the past six months.

House Bill 7 is, thus far, the only piece of enacted legislation that explicitly imposes a curricular ban on institutions of higher education. Specifically, the law reads:

The essentiality of freedom in the community of American universities is almost self-evident. No one should underestimate the vital role in a democracy that is played by those who guide and train our youth.

We urged Gov. Ron DeSantis to veto the legislation, but he signed the bill into law in April. FIRE stands ready to assist faculty members who are silenced by this unconstitutional law.

House Bill 2670 was signed by Gov. Bill Lee in April and poses two concerns. Our first concern stems from language that would prohibit state funds from being used “to incentivize, beyond payment of regular salary or other regular compensation, a faculty member to incorporate one (1) or more divisive concepts into academic curricula.”

FIRE is monitoring Tennessee institutions to ensure that the bill is not used to undermine academic freedom in the Volunteer State.

The legislation prohibits the use of state funds to incentivize any of the listed “divisive concepts,” but by singling out those ideas, it seemingly allows state funds to be used to promote or incentivize the teaching of a host of other viewpoint-based concepts. This viewpoint-based denial of state funds for a specific purpose is contrary to longstanding protections for academic freedom. As the Supreme Court made clear in Iancu v. Brunetti, “The government may not discriminate against speech based on the ideas or opinions it conveys.”

Our second concern comes from language in the bill that bans “divisive concepts” in mandatory university trainings, but defines “Training” to include “seminars, workshops, trainings, and orientations.” Legislatures have substantial latitude to regulate how a state institution speaks for itself in such programs as non-credit-earning trainings. However, since the law’s definition of “training” includes “seminars” — and this term is often used to describe small, intensive for-credit courses — the provision could be read to prohibit the teaching of “divisive concepts” in higher education classrooms. Fortunately, the bill has several clauses indicating that none of the provisions are meant to regulate classroom instruction. While it is not uncommon for trainings to be described colloquially as “seminars,” the word “training” is rarely, if ever, used to refer to for-credit courses.

However, we have seen instances when universities misapply these laws. For instance, in Oklahoma, a law aimed at regulating diversity trainings led a college to temporarily suspend classes while it evaluated the scope of the law. FIRE is monitoring Tennessee institutions to ensure that the bill is not used to undermine academic freedom in the Volunteer State.

Senate Bill 409 was first introduced in June 2021, at which point it ranked among the worst “race and sex stereotyping” bills we had seen. The bill required the Wisconsin Board of Regents to “prohibit institutions from allowing an instructor to teach race or sex stereotyping, including any of following [listed] concepts, to students in any course or as part of any curriculum.”

“There is a black letter, non-negotiable rule from the Supreme Court, multiple times, that you cannot constitutionally take topics off of the table in higher ed.”

FIRE made the case that the curricular ban in higher education was unconstitutional and worked with legislators to improve the bill. Through amendments, SB 409 was dramatically improved. Instead of prohibiting certain topics from being taught in college classrooms, the bill would have prohibited instructors from compelling students to “affirm, adopt, or adhere to” certain concepts. As we have previously stated, protecting a student’s freedom of conscience is a laudable goal for a state legislature. In our “Guide to First-Year Orientation and Thought Reform on Campus,” we wrote:

[a] professor may have ground rules to ensure civility and order, and a professor should insist upon mastery of a subject (while protecting a student’s right to reasoned dissent). But a professor has no right to demand ideological uniformity.

Further, the bill was amended to include strong academic freedom language, prohibiting any policy or employee of a public institution of higher education from limiting the “expressive rights and academic freedom of an instructor” to do any of the following:

(a) Conduct research, publish, lecture, or teach in the academic setting.

(b) Require students to participate in instructional exercises with legitimate pedagogical purposes that involve exploring, or arguing for or against, the tenets set forth in sub. (1) (a) to (h).

(c) Speak publicly as a private citizen on matters of public concern.

With the removal of the curricular ban and the inclusion of the strong anti-coercion and academic freedom language, FIRE supported this legislation.

In South Carolina, five bills were introduced that touched on race and sex stereotyping, three of which initially containing provisions that would apply to institutions of higher education. The Education and Public Works Committee held three hearings of public testimony on all five bills. FIRE Legislative and Policy Director Joe Cohn testified in the March 8 hearing and advised legislators, “There is a black letter, non-negotiable rule from the Supreme Court, multiple times, that you cannot constitutionally take topics off of the table in higher ed, in college classroom settings. Period.”

On March 30, the committee unveiled a committee-sponsored bill, House Bill 5183. While some of the provisions from the original five bills were incorporated into this proposal, the legislators wisely excluded institutions of higher education from the new bill. HB 5183 passed the House but failed to pass the Senate prior to adjournment.

First, House Concurrent Resolution 2001 would have amended the Arizona Constitution to prohibit public education institutions, including institutions of higher education, from compelling students or employees to affirm an “idea contrary to Title VI of the Civil Rights Act of 1964 . . . and Article II, section 36 of [the Arizona] Constitution.” Further, the bill would prohibit college faculty members from “promot[ing] or endors[ing] the tenets . . . of this section, including by using public resources or facilities to endorse the tenets described . . . in this section.”

Thus, no resources could be spent on any events or activities that promote particular ideas. This would include a prohibition even on faculty members inviting outside speakers to address the prohibited “tenets.”

We remain eager to work with lawmakers  across the political spectrum to ensure legislation does not encroach on crucial rights of students and faculty.

If HCR 2001 had passed the Senate, the resolution would have been subject to the approval of Arizona voters on the November ballot. However, the legislation did not get a vote in the full Senate prior to adjournment.

Second, the House of Representatives added a late amendment to Senate Bill 1412 which included unconstitutional language. Specifically, the amendment would have barred faculty and guest speakers from “provid[ing] instruction to students or employees that promotes or advocates for” specified concepts, including topics related to race and ethnicity, and it would have applied only to college students who were taking required courses in teacher preparation programs.

The bill was amended again in a conference committee, resulting in the removal of the higher education curricular ban. However, the bill failed to pass before the legislature adjourned at the end of June.

Senate Bill 377 initially contained provisions that amounted to a curricular ban in higher education. Tyler Coward testified against these unconstitutional provisions at the February 28 Senate Committee on Education and Youth hearing on the bill. The language was eventually narrowed to only apply to primary and secondary education, but the bill died in the House in favor of House Bill 1084, a “divisive concepts” measure that never included provisions related to public institutions of higher education, which was signed by Gov. Kemp in April.

House Bill 1012 prohibits institutions from compelling students to “affirm, adopt, or adhere” to certain concepts. South Dakota legislators and the governor’s office consulted FIRE early in the legislative process to ensure the bill did not impose a ban on what could be taught in college classrooms. Instead, the bill protects students’ freedom of conscience by prohibiting public institutions or their governing boards from “direct[ing] or compel[ling] a student to personally affirm, adopt, or adhere to divisive concepts.”

After the bill was passed and signed into law, Gov. Kristi Noem commented: “So now, in South Dakota going forward, Critical Race Theory cannot be taught in our universities.” However, as mentioned, the bill does not impose a curricular ban at South Dakota’s institutions of higher education. In fact, the bill expressly guarantees that it will not be used to infringe on the academic freedom rights for students and employees, stating that nothing in the act:

Pertains to the content or conduct of any course of academic instruction or unit of study at an institution of higher education under the control of the Board of Regents or the Board of Technical Education[.]

FIRE will continue to monitor the legislative landscape and oppose bills that impose limits on First Amendment rights and academic freedom. We remain eager to work with lawmakers  across the political spectrum to ensure legislation does not encroach on crucial rights of students and faculty.