FIRE > Newsdesk > Top Story > I want to go to law school, but I’m not excited for 3 years of illiberalism and controversy 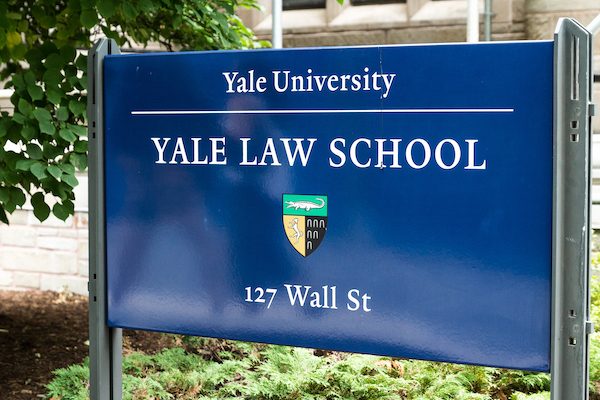 As Yale Law School grapples with the recent disruption of an event featuring student-invited speakers, other law schools across the country also face pressure from students to disinvite speakers, fire professors, and derecognize student organizations.

Confrontations like these — taking place at institutions where students should be expected to learn about the legal principles surrounding our fundamental liberties —  are a buzzkill for people like me who plan to attend law school and want to engage with different perspectives.

My interest in attending law school stems from more than just a fascination with the law and a love for “Legally Blonde.” I’ve always been interested in debate and engaging people with diverse perspectives. As far back as elementary school, I would debate politics with my friends during our 30-minute lunch period in the school’s cafeteria.

It may be naïve, but I’ve always seen law school as an environment focused on intellect, cultural and viewpoint diversity, and a shared love of the law. But as I’ve gotten closer to applying — I plan to apply next cycle — I’ve paid more attention to what’s going on at the law schools I’m interested in attending. What I’ve found is that Yale is not alone. At campuses across the country, law students on both sides of the political aisle have denounced free speech, shouted down speakers, and refused to engage with those with whom they disagree.

If you’re actually trying to combat what you consider hateful perspectives, the best way to do so is to speak with the people who hold them, and maybe even change their minds.

In November 2020, the Student Bar Association at Rutgers Law School in Camden added a section to its constitution requiring student groups to plan diversity-themed events to receive more than $250 in university funding. Once FIRE pointed out that this provision is unconstitutional viewpoint discrimination, the SBA, to its credit, rescinded it. A month later, at the University of Illinois Chicago, a law professor was investigated following student complaints for including redacted references to slurs on a civil procedure final exam.

Then, in January 2021, law students called on Seattle University School of Law to derecognize the campus chapter of the Federalist Society if it didn’t denounce Sens. Ted Cruz and Josh Hawley. After numerous calls from FIRE for the university to speak up and reaffirm that students cannot derecognize a club on that basis, the university publicly asserted that it would protect the students’ associational rights. A couple of months later, in June, a Stanford law student’s graduation was placed on hold after students in the Federalist Society objected to a satirical email lampooning the group. After FIRE brought attention to the issue, the hold was quickly removed.

More recently, Georgetown University Law Center acquiesced to demands from law students and the public to investigate incoming lecturer Ilya Shapiro after he tweeted that President Biden’s campaign promise to only nominate a Black woman to replace Supreme Court Justice Stephen Breyer on the court would make the nominee a “lesser black woman” who would “always have an asterisk attached.” This later led to the disruption of an event featuring Shapiro at the University of California, Hastings College of the Law, during which students taunted and screamed at Shapiro, stopping the event entirely.

The backlash grows over Georgetown Law’s decision to suspend and investigate Ilya Shapiro.

Even his sharpest detractors are lining up to do what Georgetown’s administration is unwilling to do: defend his right to “untrammeled” expressive freedom.https://t.co/u13hLMqiLG

A culture of illiberalism seems to have overtaken the very institutions where students are supposedly taught the significance and relevance of the concepts of free expression and individual rights. As my colleague Aaron Terr told the New York Sun, the rise in censorship and “lack of appreciation for bedrock principles” is especially concerning at law schools because they serve as “pipelines to halls of power.”

This could stem from the lack of focus on the First Amendment and individual rights in required courses; or from faculty prioritizing other interests; or, from a student body that increasingly lacks respect for dissenting opinions. It could be a combination of all these reasons, or some other reasons I’m not considering. Regardless, the uptick in incidents at law schools we’ve observed is not a good sign for the future values of our nation’s law schools or lawyers.

Now, I don’t believe that students must engage with different opinions (though I do think it’s valuable in a civil society, and all but a necessity in the practice of law). However, there’s a difference between refusing to hear differing opinions and preventing those opinions from being heard.

There is another way to deal with ideas you find repugnant. In 2020, Clarence Thomas taught a two-week course at the University of Florida’s Levin College of Law. Law students gathered in the courtyard to protest Thomas’ appearance. There was no substantial disruption, and the students said they weren’t trying to “end [Thomas’] class.”

The uptick in incidents at law schools we’ve observed is not a good sign.

Instead, students requested that the law school explain why Thomas was invited and that it include students in considering who to invite to speak on campus in the future.

This is the appropriate way to deal with disagreement about invited speakers. These protests constitute more speech and should be encouraged. Civil disagreement is a positive thing — but shouting down speakers and calling for professors to be fired is not civil or intellectually or socially healthy.

As I approach September, when I aim to submit my applications, I will continue to watch events unfolding at law schools across the country. When I step foot on campus, I hope things will have improved, though I have increasingly serious doubts whether that’s a reasonable expectation.

If I can tell other young people one thing, it’s that demonizing those with different perspectives leads only to polarization. Casting off those whose opinions you find repugnant will only further cement those individuals’ opinions. Engaging in debate and disagreement, on the other hand, can actually be productive. If you’re actually trying to combat what you consider hateful perspectives, the best way to do so is to speak with the people who hold them, and maybe even change their minds.