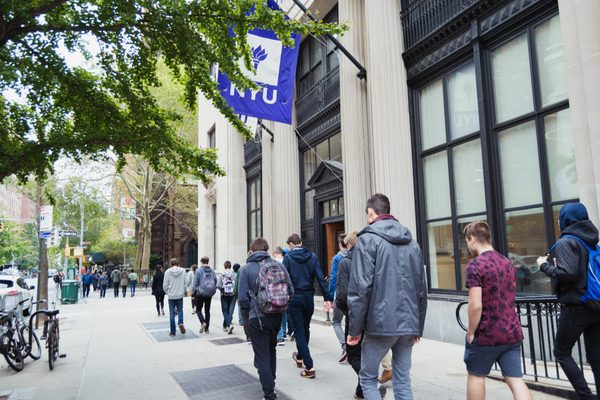 Earlier this month, in a disappointing ruling, the New York Supreme Court, Appellate Division, First Department, one of the state’s intermediate appellate courts, reversed a trial court’s decision that protected the due-process rights of students at New York’s private colleges and universities.

The case began last fall, after New York University suspended three students for attending off-campus gatherings  — sometimes without wearing a mask — before the fall 2020 semester began. The students sued in New York state court and won. The trial court, in its October decision, carefully examined each of NYU’s communications with students and parents and found that the university had not provided students with adequate notice that attending off-campus gatherings before the semester began could subject them to discipline, let alone the serious sanction of suspension.

Unclear, vague rules and regulations are incompatible with basic fairness.

NYU did not notify students that off-campus gatherings could subject them to serious disciplinary sanctions until September 3, after the semester had started. At the time, one NYU administrator claimed the university had “no desire to subject its students to conduct proceedings . . . [or] to create a ‘Gotcha!’ atmosphere.” But NYU did exactly that by failing to specify that its new regulations concerning off-campus gatherings included gatherings before the semester began.

FIRE was pleased to see the trial court — the Supreme Court of New York, New York County  — require NYU to provide students with “clear, concise, and full advance notice” of what it considers to be prohibited conduct, in line with the Supreme Court of the United States’ standard that due process requires fair notice of proscribed conduct. The court found that NYU did not provide such notice and that this failure was arbitrary and capricious under Article 78 of New York’s Civil Practice Law and Rules. Accordingly, the court overturned NYU’s disciplinary sanctions against the three students involved in this lawsuit.

After NYU appeals, FIRE files an amicus brief in support of the students

In its appeal, NYU argued that the trial court’s holding requiring “clear, concise, and full advance notice” of prohibited conduct was erroneous.

But unclear, vague rules and regulations are incompatible with basic fairness. As the Supreme Court of the United States has explained, “[i]t is a basic principle of due process that an enactment is void for vagueness if its prohibitions are not clearly defined.”

In December, FIRE filed an amicus curiae (“friend of the court”) brief in support of the students urging the court to uphold the trial court’s decision. Our brief highlighted the serious due process issues implicated by NYU’s actions, and demonstrated how the court’s ruling would also affect other NYU students who were suspended for nearly identical behavior.

NYU promises students that its disciplinary proceedings will provide “procedural fairness” and a “fair and impartial process.” As we wrote in our brief, “[t]he basic tenets of fairness demand that NYU provide its students with clear notice of the type of conduct that is prohibited before students risk serious discipline by engaging in prohibited conduct.”

Unfortunately, the appellate court sided with the university and reversed the trial court’s decision on the grounds that NYU’s decision to suspend the students “was made in the exercise of its honest discretion.”

While New York courts have interpreted Article 78 to require some deference to college and university disciplinary decisions, they too often exhibit complete deference to institutional decisions, failing to afford students any meaningful protection under Article 78.

In its decision, the court overturned the trial court’s robust notice standard, instead deferring to NYU and citing the court’s “limited role” in reviewing the disciplinary decisions of private schools.

Instead of carefully considering the bounds of each of NYU’s communications to students in the weeks leading up to the fall semester, as the trial court had, the court determined that NYU’s existing student conduct policies and “the attendant and widely known contemporaneous societal circumstances” — the COVID-19 pandemic — provided the students with sufficient notice that attending off-campus gatherings, even before the semester began, was prohibited.

The court went on to find that NYU’s requirement that students returning to campus for the fall semester produce a negative COVID-19 test “implicate[d] safe practices” and that communications from NYU to students and parents on July 30 and August 14, which the trial court specifically found did not apply until after the semester began, “can rationally be understood to immediately govern student conduct” and “communicate[d] a sense of urgency.”

This deferential reading of NYU’s actions, particularly in light of the trial court’s careful consideration of each of the university’s communications with students as well as the challenges of the pandemic, does a disservice to students’ rights at private institutions across New York and fails to live up to the fairness NYU promises its students in its own policies.

Article 78 protects students and faculty at New York’s private colleges and universities from decisions that are “arbitrary and capricious” or “made in violation of lawful procedure.” While New York courts have interpreted Article 78 to require some deference to college and university disciplinary decisions, they too often exhibit complete deference to institutional decisions, failing to afford students any meaningful protection under Article 78.

Newsdesk readers will be familiar with the case of the Fordham students whose proposed chapter of Students for Justice in Palestine was denied recognition because it could lead to “polarization” on campus. The students won their Article 78 suit at the trial court, only to have that decision overturned by the Appellate Division, First Department in December. (The students have appealed to New York’s highest court, and FIRE weighed in with another amicus brief urging the court to consider the case earlier this year.)

Another example is the Syracuse University chapter of the Theta Tau fraternity, which was suspended for performing a satirical skit in 2018 that the trial court found was protected expression under Syracuse’s policies (and which FIRE pointed out was protected expression in two letters to the university and an amicus brief). Yet in a contradictory decision, the trial court ruled against the students, and the appellate court affirmed.

A third instance is the case of Fordham student Austin Tong, who sued the university under Article 78 last fall after he was suspended for his Instagram posts. His case was dismissed by the trial court on the grounds that Fordham administrators did not act in an arbitrary and capricious manner in determining that his Instagram posts violated university policy. (While it frequently fails to live up to them, Fordham promises its students freedom of expression, and as FIRE wrote at the time, Tong’s Instagram posts were protected expression.)

One notable exception to this pattern is a recent decision by the Supreme Court of New York, Onondaga County, which in March ruled that Syracuse had “no rational basis” to suspend the Alpha Chi Rho fraternity.

More rulings like the one against Syracuse, and fewer like this latest order from the Appellate Division, First Department, permitting NYU to suspend students based on a post-hoc determination of the scope of its own rules, would protect student rights by holding private colleges and universities across New York to their own policy promises. FIRE respectfully implores New York courts to revitalize Article 78 to provide meaningful protection for students by at the very least requiring private colleges and universities to honor their word.