FIRE > Newsdesk > Top Story > In for a Pence, in for a pound: Mike Pence’s appearance at Stanford marks victory for free speech 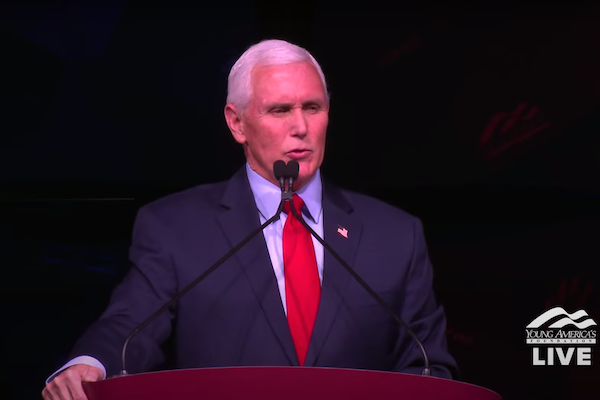 Much of the media attention surrounding former vice president Mike Pence’s appearance at Stanford University Thursday night focused on the content of his speech — but it was a long road to have Pence speak on campus in the first place.

After more than two months of conflict over the Stanford College Republicans’ invitation to Pence, Pence finally addressed students last night. Pence discussed major issues facing the Republican Party in a 30-minute speech and took questions from a lively audience. Pence’s visit drew student protests prior to the event — as these students exercised their own right to free expression, as promised by Stanford — but there were no reports of any substantial disruptions.

Prior to the speech, protesters gathered outside the venue holding signs reading “Refuse Fascism,” “Stand Against Hate,” and “Save Our Immigrant Parents,” while chanting phrases like, “Hey hey, ho ho, Mike Pence has got to go,” and “We are the woke left,” a reference to the fact that Pence’s speech was titled “How to Save America from the Woke Left.” A group of protesters reportedly engaged with one event attendee who argued with them over the importance of hearing Pence speak.

In the end, the peaceful proceedings are a victory for the expressive rights of Stanford’s students. Pence was able to speak, and those opposed to his views were able to protest. Speech was met with more speech.

Last night marks an important victory for free speech in large part because it seemed all too possible that the event wouldn’t take place at all. During a meeting on Dec. 7, the student senate indicated that it was initially denying funding for the event, at least in part, because of concern about the “propagation of ideals that may be harmful to marginalized students on campus,” as one student senator said. The senators also discussed concerns about student safety and the potential spread of COVID-19.

In response, the senate approved modifications to the event that included a cap on the number of attendees and health checks for Stanford students — but still voted down funding for the event. It took the intervention of Stanford’s Constitutional Council, a four-person student oversight board for the Stanford student government, to reverse the senate’s decision based on a procedural error in the vote-counting.

The council’s decision did not reach the question of viewpoint-based discrimination, but meant that funding for the speech would move forward — and cautioned that the council would entertain the expressive freedom issue if the senate again attempted to claw the funding back.

The viewpoint-neutral justifications of COVID and general student safety initially offered by the senate proved to be pretextual — Stanford’s policies on COVID-19 allow for events with certain modifications, and the senate had also imposed certain requirements to deal with the spread of COVID-19 before declining to fund the event. As FIRE pointed out, Stanford was more than capable of handling security for a large event.

A student government senator who abstained from the public vote for the Pence event said he did not want “blood on my hands,” a statement long on hyperbole but short on specifics — and strongly indicative of a viewpoint-based funding denial.https://t.co/CpKg9xDqIX @Stanford

Of course, as FIRE supporters know all too well, this is far from the first time that broad concerns about “safety” have been seized upon as a pretext for censorship.

For example, in 2019, Harvard University required a Palestinian rights student group to have extra security at an event held by the group — then attempted to impose the fee for the extra security on the group with the implicit threat that the event would be canceled if the group did not pay. Cypress College also effectively endorsed a “heckler’s veto” last year by ordering an adjunct lecturer to take a leave of absence after a tense exchange with a student over policing went viral and led to public anger at the college. And more recently, last month, Dartmouth College unilaterally canceled and moved online a student-run event featuring conservative journalist Andy Ngo due to unspecified security concerns. Many more examples can be found in FIRE’s case archives. Concerns over student safety must be closely scrutinized to avoid censorship disguised as a response to security concerns.

Moreover, as FIRE’s Disinvitation Database shows, disinvitations because of a speaker’s politics can cut both ways. We wrote in our first letter to Stanford’s student senate that speakers as politically diverse as Cecile Richards, Joe Biden, Lori Lightfoot, and Dick Cheney have faced calls for disinvitations.

That is why it is important to enforce viewpoint-neutral, non-pretextual criteria for approving event funding for political speakers. Concerns that a speaker’s comments themselves are dangerous, or might inspire disruptive conduct, cannot be used to justify censorship; speech must be “directed to inciting or producing imminent lawless action and [. . .] likely to incite or produce such action” before losing First Amendment protection as unlawful incitement.

Pence was able to speak, and those opposed to his views were able to protest. Speech was met with more speech.

Declining to fund an event on the basis of a speaker’s viewpoint establishes a chilling precedent that will be used against student groups of all political stripes, a possibility that the Stanford student senate acknowledged in a public statement in November: “Denying [the College Republicans] funding based solely on our disdain for the speaker would set a dangerous precedent that could hurt other communities on campus in the future, something we would like to avoid.”

We could not agree more. Students should be able to hear from speakers with whom they disagree — or agree! — and respond with their own speech. The student senate should ensure that, in the future, student senators separate their personal beliefs from their roles as senators, in order to uphold the expressive rights that Stanford promises its students.