Spotlight on Due Process 2017

Due process and fundamental fairness are in crisis on America’s college and university campuses. Colleges today investigate and punish offenses ranging from vandalism and housing violations to felonious acts of sexual assault, taking on the responsibility—often at the behest of the federal government—to punish offenses that are arguably better left to courts and law enforcement. But this willingness to administer what is effectively a shadow justice system has not been accompanied by a willingness to provide even the most basic procedural protections that should accompany accusations of serious wrongdoing.

For the first time, the Foundation for Individual Rights in Education has rated the top 53 universities in the country (according to U.S. News & World Report) based on 10 fundamental elements of due process. The findings are dire: 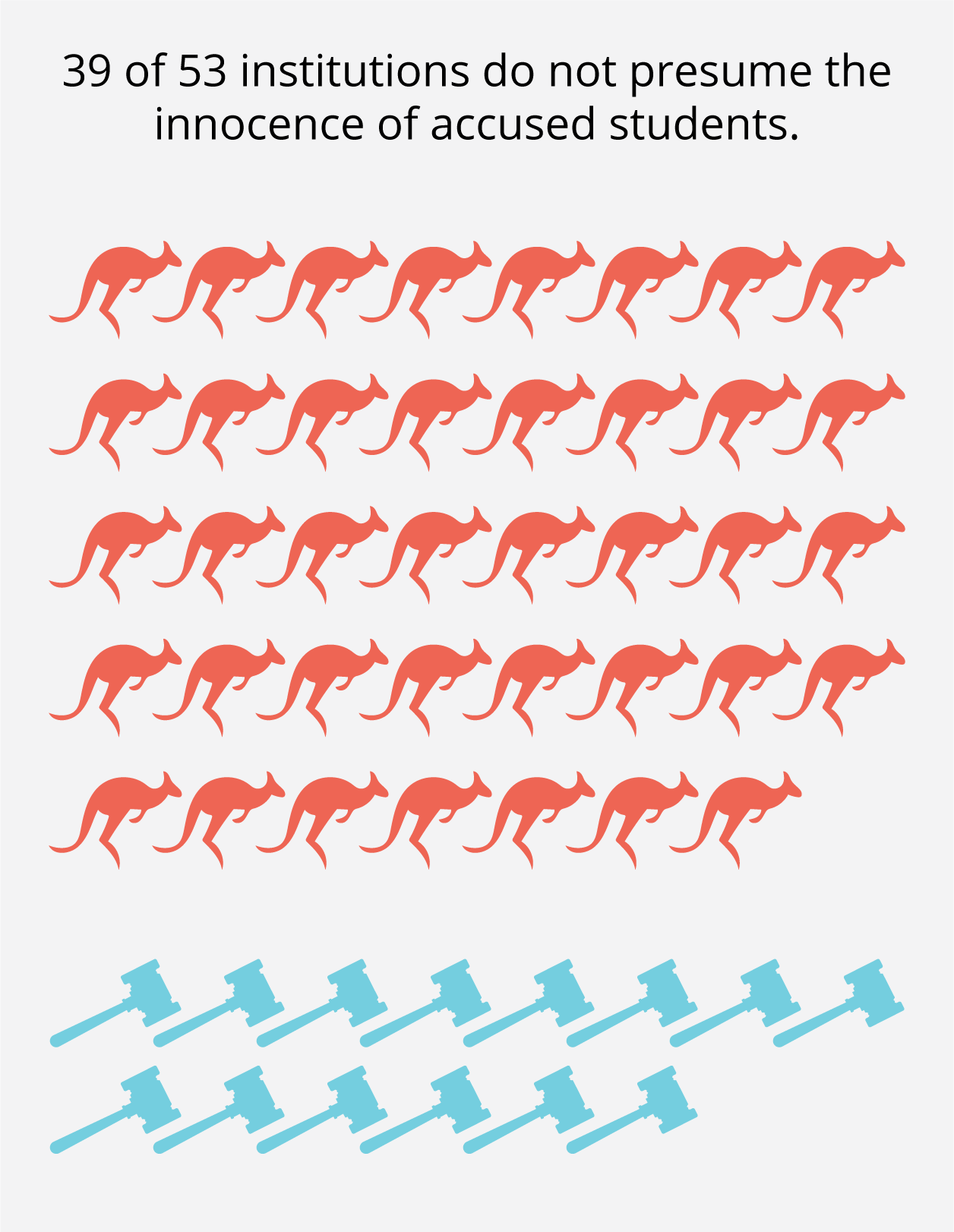 FIRE has publicly led the fight to restore due process on our nation’s campuses by highlighting abuses and bringing the attention of media, lawmakers, and the public to the problem. We were motivated to undertake this project by our success in working with colleges and universities to reform policies that violate students’ free speech rights. The dramatic drop in restrictive speech codes in the years since FIRE first began rating university speech policies—and challenging institutions to improve them—has encouraged us to strive towards similarly positive results in the due process context. It is our hope that our due process ratings will provide universities with clear criteria for improving the fairness of their student conduct processes.

For this report, FIRE analyzed disciplinary procedures at the 53 top-ranked institutions nationwide according to U.S. News & World Report’s National University Rankings. (The last four institutions are all ranked #50.)

Where institutions maintain different policies for cases involving alleged sexual misconduct and other cases, we analyzed both sets of policies. The vast majority of schools have maintained separate policies since the Department of Education’s Office for Civil Rights issued its April 4, 2011 “Dear Colleague” letter, which imposed extensive new obligations on universities with regard to their handling of sexual misconduct claims. (FIRE is sponsoring a lawsuit against the Department challenging the Dear Colleague letter’s legality.)

In analyzing each set of disciplinary procedures, FIRE looked for 10 critically important procedural safeguards. For each element, institutions received zero points if the safeguard was absent, was too narrowly defined to substantially protect students, or was subject to the total discretion of an administrator; one point if the policy provided some protection with respect to that element; and two points if the safeguard was clearly and completely articulated.

FIRE recognizes that distilling the concept of due process down to 10 elements is necessarily reductive. In order to be truly “fair,” some proceedings may require elements we did not list, or stricter adherence to those we did. In other proceedings, some of the safeguards we list may not prove to have an effect on the ultimate outcome. We welcome discussion about what we might include in future reviews, or what was included that should not have been.

After each institutional policy set was awarded zero to 20 points, it was graded as follows:

Because each policy is written differently, points awarded to institutions often depended on nuances of wording, the overall structure of the proceedings described, and FIRE’s decision to resolve ambiguities against the institution where more clarity could reasonably be expected. Vaguely written provisions, or those that grant broad discretion to administrators, may easily be abused to deprive students of their right to a fair hearing, and therefore FIRE considers them inadequate to protect students and secure fundamentally fair proceedings.

The rated safeguards are as follows:

1 A clearly stated presumption of innocence, including a statement that a person’s silence shall not be held against them.

2 Adequate written notice of the allegations. Adequate notice should include the time and place of alleged policy violations, a specific statement of which policies were allegedly violated and by what actions, and a list of people allegedly involved in and affected by those actions.

4 A prohibition on conflicts of interest that could compromise the integrity of the process (i.e., advocates cannot serve as investigators or fact-finders, and fact-finders must not hear the appeal).

6 Access to and the right to present all relevant inculpatory and exculpatory evidence at hearing.

7 The ability to pose relevant questions to witnesses, including the complainant, in real time, and respond to another party’s version of events. If questions are relayed through a panel or chairperson, there must be clear guidelines setting forth when questions will be rejected, and the reason for refusing to pose any rejected question should be documented.

8 The active participation of an advisor of choice, including an attorney (at the student’s sole discretion), during the investigation and at all proceedings, formal or informal.

9 The meaningful right of the accused to appeal a finding or sanction. Grounds for appeal must include (1) new information, (2) procedural errors, and (3) findings not supported by the record. Appeals must not be decided by the investigator or original fact-finding panel.

10 Unanimity of panel must be required for expulsion.

University of California-Berkeley B15/20

University of California-Berkeley sexual misconduct B13/20

University of California-San Diego B15/20

University of Pennsylvania B13/20

University of Southern California B13/20 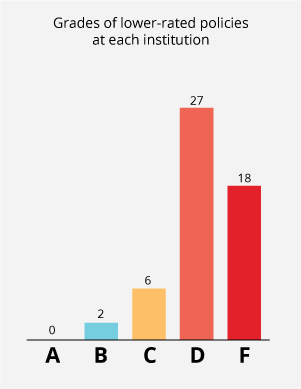 Written disciplinary policies and procedures varied greatly among the 53 schools FIRE rated for this report. There were, however, some notable trends.

Alarmingly, 39 institutions (73.6% of rated schools) do not guarantee accused students the right to be presumed innocent until proven guilty. The presumption of innocence is perhaps the most fundamental right that can be granted to students accused of misconduct. Without it, other procedural safeguards still may not be enough to protect students from the risk of inaccurate findings of guilt. (For purposes of this section, unless otherwise specified, institutions are deemed to afford the safeguard being discussed if they guarantee that right in both cases involving allegations of sexual misconduct and other non-academic misconduct.)

Of the procedural safeguards enumerated in FIRE’s checklist, the rarest among surveyed schools is the requirement that a unanimous panel of fact-finders conclude the respondent is responsible before he or she is expelled from the institution. Only one institution (1.9% of all institutions rated), Johns Hopkins University, requires unanimity of the panel decision in all non-academic cases in which expulsion is a potential sanction. One other institution, Duke University, requires unanimity only if the fact-finding panel comprises no more than three individuals.

The most commonly granted procedural safeguard is the right to appeal, particularly based on new information or procedural errors. Of 53 rated institutions, 17 schools (32.1%) allow for appeals based on these two factors or if the finding is not consistent with the record. Additionally, 26 institutions (49.1%) allow for appeals based on two of the three grounds enumerated in FIRE’s checklist. Only 10 institutions received scores of zero in this category, either allowing appeals only on one basis or providing insufficient separation between the original and the appellate decision-makers. 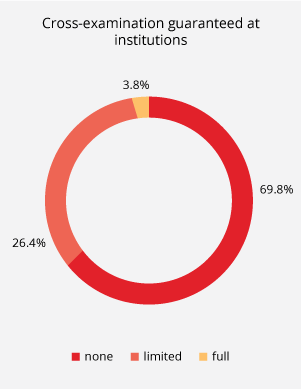 The ability to cross-examine witnesses in real time is particularly crucial in campus sexual assault cases, which often lack witnesses and physical evidence and therefore may rely heavily on the relative credibility of the accuser and the accused. Yet 37 institutions (69.8%) do not provide students a meaningful opportunity to cross-examine witnesses in at least some cases, and 32 institutions (60.4%) do not provide such an opportunity in cases of sexual misconduct. Only two institutions (3.8%) provide an opportunity for cross-examination in all cases and clear guidelines that ensure all relevant questions are relayed to the party being questioned.

With respect to the remaining checklist items—adequate written notice of charges, adequate time to prepare, a prohibition on conflicts of interest, and access to and the right to present all evidence—a large fraction of institutions had at least some protection for students, but institutions that fully and clearly articulated those safeguards remain small minorities. Like all of the checklist items, these safeguards are essential in order to ensure fair proceedings for all students.

3. Sexual misconduct versus all other non-academic misconduct

All but three institutions rated for this report—Rensselaer Polytechnic Institute, Tulane University, and the University of Florida—maintain separate policies and procedures for cases alleging sexual misconduct.

Of the remaining 50 institutions, sexual misconduct policies are less protective of students’ rights at 29 institutions (58%), non-sexual misconduct policies are less protective at 9 institutions (18%), and the two policies receive the same number of points at 12 institutions (24%). While policies governing alleged sexual misconduct generally provide fewer procedural safeguards, these are often the cases in which procedural safeguards are most needed in order to ensure fundamental fairness and protect accused students against the life-changing effects of erroneous findings of responsibility. For example, cross-examination is a critically important tool in cases of alleged assault where witness credibility is at issue.

Students’ ability to obtain a fair hearing is hindered not just by policies that clearly lack procedural safeguards, but also by confusing, contradictory, poorly drafted, or difficult-to-access policies. In assessing disciplinary procedures for this report, the following problems became readily apparent and require attention regardless of whether an institution wishes to change its procedural practices.

Some institutions rated in this report maintain not one policy, or two, but several that overlap and sometimes conflict with each other. This will inevitably confuse students and make it harder for them to assert their rights to fair disciplinary proceedings. It also increases the potential for procedural inconsistency among similar cases.

The University of California, Irvine, for example, posted on its website five different policies governing student discipline, including overlapping University of California system policies. Georgia Institute of Technology maintained one policy governing sexual misconduct cases, as well as one policy for non-academic cases. Another policy—with fewer procedural safeguards—appeared to apply to both academic and non-academic cases, was available on the university’s website, and was readily available by searching for Georgia Tech disciplinary procedures through Google. Because other text on the website indicated it was not a current policy, it was not included in the statistics for this report. Its continued existence on Georgia Tech’s website, however, could easily confuse students seeking resources on disciplinary procedures. Accordingly, all institutions should take care to remove from their websites or place prominent notices on all policies that are no longer in effect, including those that are not linked but that have been indexed by search engines.

Written policies at some institutions seem to suggest that in practice, students are afforded more information or more time to prepare or other safeguards than the policy explicitly enumerates. Without a clear statement that additional safeguards are guaranteed, however, these suggestions or inferences cannot be counted for the purposes of this report. Where institutions’ ratings have suffered because of imprecise language or administrators’ reliance on the mere implication of a safeguard, those schools can easily improve their ratings—and the integrity of their systems—by simply revising the language of their policies to be clear and explicit.

Finally, while a majority of institutions post each set of policies governing disciplinary procedures in one searchable PDF or on one searchable HTML page, some institutions split policies into many pages or sub-pages that cannot be searched, printed, or conveniently viewed all at once. Tufts University, for example, maintains a “Student Judicial Process” webpage containing over 60 separate sections, each only accessible individually via drop-down segments within the page. Students are far better served when their schools present information in a straightforward and easily-accessible format.

In order to best protect students’ right to fundamentally fair disciplinary proceedings, institutions should strive to unify all applicable disciplinary policies and procedures into one clear and internally consistent document. This document should be searchable and easily found on the university website.

Disciplinary procedures at institutions nationwide share many shortcomings. However, most of the deficiencies discussed above can be readily fixed through policy revisions. Just as FIRE has helped numerous institutions reform their speech-restrictive policies to better protect freedom of expression on campus, we stand ready to help institutions revise their disciplinary policies and procedures to better protect due process rights and fundamental fairness.

Administrators or students who would like to work with FIRE, the nation’s leading student rights organization, in support of fair policies are encouraged to contact us at dueprocess@thefire.org.